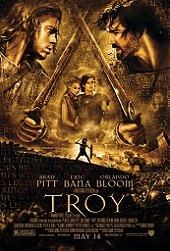 ''I'll tell you a secret. Something they don't teach you in your temple. The Gods envy us. They envy us because we're mortal, because any moment might be our last. Everything is more beautiful because we're doomed. You will never be lovelier than you are now. We will never be here again.''

An adaptation of Homer's great epic, the film follows the assault on Troy by the united Greek forces and chronicles the fates of the men involved.

The release and making of Troy held slightly unfair, overblown expectations. All critics expected it to be, just like Gladiator. But why on earth would it be? They are not the same. A few points include: they're not set in the same period, the same country, nor are they about a similar topic. One is about a war, the other a personal vendetta. One is made up, the other is based on stories told over 3,000 years ago. In fact, one could almost say that the only things they have in common are sandals and swords. Oh, and remarkably everyone speaks English. Which is helpful forlazy western audiences.

Troy is a horrendously budgeted epic, and this clearly shows in its impressive production values, whether it's the awesome sight of the 1,000 ships sailing across the Aegean Sea, or the brutal battle scenes – everything looks right. However, whilst this is all well and good, problems Troy stem from the source material.

''I've fought many wars in my time. Some I've fought for land, some for power, some for glory. I suppose fighting for love makes more sense than all the rest.''

The credits claim the film was "inspired by The Iliad", and here is the first error. The film is historically inaccurate and incorrect, and this is most obvious towards the end. The Iliad is the story of Achilles, and does not involve the infamous Wooden Horse, or even the sack of Troy. These are covered in later epics The Odyssey and Virgil's The Aeneid. It's as if the director never read these works, and made up the rest of the story as he went along. Not that it makes too much difference to the story, but those familiar with the epics will feel cheated. Also the motives for the war, whilst they made absolute sense in the society in which the stories were first told, don't hold true anymore. In the epics the stories were concerned with heroes, honour and love. That this war was started because Paris stole someone else's girl just doesn't sit well with a modern audience, and so they cannot relate to these heroes. It doesn't help with the fact that the audience doesn't know which side they should be rooting for – there are in the epics no real goodies and baddies, merely two nations each with their own heroes. The director has to take time every now and again to reiterate the reasons for the war, that of Paris' love for Helen, but tries to give a more believable reason by giving Brian Cox's character of Agamemnon a more imperialistic bent, deviating further from his source.

I've envisioned Troy to seem like a disaster, but it is in fact not a complete loss. If the audience can just accept the reasons for the war, then there is little problem in enjoying the rest of the film. The beginning is slow to get going, but once Achilles (Brad Pitt) and Hector (Eric Bana) have their one-on-one clash, the film reaches a momentum it does not lose. The battle scenes easily rival any seen on the big screen to date, and most of the cast do an impressive job in portraying their heroes in varying degrees of suffering. Honours should be given to Eric Bana for his role as the suitably regal heir to Troy, who suffers the wrath of Achilles in a simply choreographed yet remarkably compelling clash, and to Peter O'Toole who plays Hector's father and king of Troy, Priam. Also, contrary to most critical response, Brad Pitt plays the character of Achilles with a suitable display of bravery, power and shows one hell of a temper, even though after his fight with Hector his motivation for staying is lost. Orlando Bloom's Paris is a little weak, turning into Legolas without the contacts and blonde wig, towards the end, and Diane Kruger's Helen lacks dimensionality, but other than this, the cast are fine. Aside from a few niggles - including a fairly clunky script which does the film no favours - and an extensive running time, Troy is an enjoyable film, which deserves to sit high up in the ranks of sword-and-sandal epics.