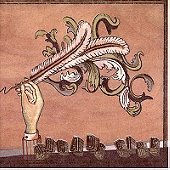 Funeral is the critically acclaimed début album of Canadian indie band, The Arcade Fire. This album didn't initially sell well but the band soon became a firm favourite of critics and musicians, when their celebrity fan base met the dizzying heights of U2 front man Bono, the general public soon caught on.

Funeral is an amazing album and is really a landmark for indie music and the music industry as a whole, opening the world up to Canadian music outside the vomit-inducing world of Bryan Adams and the power ballad. The world was only recently introduced to the concept of the orchestra in modern music, so much of modern music is still bogged down in its lead guitar-bass guitar-organ-drums formula. Bands such as the folksy/cult Polyphonic Spree have helped reinvent the orchestra, bringing it away from Opera and The Proms, showing us there is no music more pleasurable than a fluid and complex array of instruments, panning string, wood wind, brass and organ.

There are two main reasons that Funeral is such an amazing album, firstly there is the pure musical talent that oozes from every band member. Each not only possesses an ability to play some amazingly complex instruments, including the harp, French horn and accordion, but to put them together in a series of interesting and moving ways that never fails to impress. Some tracks remain mellow and haunting throughout, some build to awesome crescendos that make them acutely memorable.

The second is the way in which the album mirrors some genuinely deep emotions experienced by the band. This album was named Funeral as several of the band members friends and relations died in its making. Due to this you can't fail to feel a sense of the macabre in some of the tracks, that appeals to the Victorian-like, death-obsession that resides in us all, however residual.

Brilliant piece of art, endlessly enjoyable, the new mark to which all indie music should be measured. If you like music for the music, you'll love this.