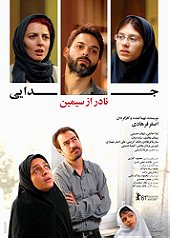 The avalanche of moral, ethical, legal and emotional dilemmas that emerges during A Separation is the best late Christmas gift for any lover of great drama. This is an overwhelming, stupefyingly well-crafted motion picture that succeeds as magnificently well as it does thanks to its layered thematic complexity, its raw realism and the top-shelf work from the best ensemble cast in a 2011 film. I beg you to please ignore the terrible poster and not to get discouraged by the fact that you'll have to read subtitles. It may be a 2-hour, dialogue-driven foreign film, but those two hours go by insanely quickly, as it's impossible not to get immersed in the ocean of conundrums that this film fires at us throughout every second of its running time. The fact that the conundrums faced by these characters are largely universal in nature will make this film resonate deeply with anyone, regardless of where they're from. A Separation is a devastating, flawless piece of minimalist cinema that refuses to take the easy way out in every turn it takes. What are you supposed to do when your moral/religious compass directs you to point A, the law directs you to point B, and the urgent need to save your own skin and that of your loved ones directs you to point C?

Termeh (Sarina Farhadi) is an 11-year-old girl who lives in an apartment with her parents and her grandfather, an Alzheimer's patient. Unfortunately, her father, Nader (Peyman Maadi), recently decided to apply for a divorce from Termeh's mother, Simin (Leila Hatami). The rift in the marriage came as a result of the fact that Simin wants to move somewhere where the family can have better opportunities, while Nader refuses to leave his mentally sick father in someone else's care. For reasons that won't be revealed till later, young Termeh decides to stay living with her father and grandfather, rather than move somewhere with her mother. While Nader is at work during the day, the grandfather is looked after by a female caretaker named Razieh (Sareh Bayat), who is very much in need of the money she gets from this job, but she's a little worried about the gender dynamics of it, to the point that she'd rather call Simin (who no longer lives in the apartment) to get advice on how to do certain things. When the grandfather soils himself, Razieh worries about whether or not it'd be a sin for her to clean him up herself. As tricky as that all may sound, you have no idea how complicated things are about to get. Discussing the plot further would inevitably take me into spoiler territory, but suffice it to say that, one day when Nader returns from work, something happens between him and Razieh. The event may initially seem like an insignificant scuffle, but it eventually snowballs into something so catastrophic that it threatens to destroy the lives of two families. Much like a tsunami or a train's derailment, it's a disaster you can't look away from.

A lot of the films that I've seen in recent years that have tried to capture a slice of life in a Middle Eastern country have focused a lot on black-and-white issues that we're well aware of, such as bitter battles over religious differences and the status of inferiority to which women are relegated. These films have been particularly straightforward in their portrayal of villains and victims - even the most feeble-minded moviegoer can tell who's the abuser and who's the abused. But that's not the case with A Separation, a film in which, just when you think you found a character who is the most morally righteous, the one you can root for, he or she will then do something that will make you question your choice. A Separation is completely non-judgmental - it portrays ALL of its many characters as vulnerable people. They all bend the truth (and even outright lie) every once in a while. They all do things they shouldn't do. But they're all also victims of that same behavior from the other characters, and they all do what they do out of a desperate desire for survival, which makes all of this a knotty, vicious circle of moral difficulties. Of course, this makes the film enormously stimulating and thought-provoking for the audience member, because one is constantly trying to determine whose side one should be on. This is also the kind of film that will make you wish a rewind button were available in the movie theater. The scuffle between Nader and Razieh careens into so many debates over small details in terms of HOW certain things happened, that you'll wish you could revisit the event. "Wait, did she actually tell him?" "Did he really push her that hard?"

At a certain point, one may start wondering whether the titular event is as central to the plot as the title would suggest, seeing as Nader and Simin separate at the beginning of the film, and the rest of the film seems to be exclusively about the consequences of what happened between Nader and Razieh. But as the film's moral dilemmas continue unfolding and as Simin slowly starts involving herself more and more in the situation, one realizes that the "separation" refers to much more than just the couple's physical parting from each other. The divide between Nader and Simin is meant to reflect the current rift in Iran between those who wish to continue living under rigid, by-the-book conservatism and those who believe that certain adjustments are needed in order for people to attain a better quality of life. Notice the contrast between Simin's decision at the beginning of the film when she has to decide whether or not to pay extra money to the people helping to carry the piano versus Nader's decision at the gas station in regard to whether or not the employee should receive a tip. At one point early on in the film, Nader is helping Termeh with some homework, and Termeh insists that she's supposed to answer something the way her teacher told her to answer it, rather than the way the books say it should be answered, but Nader responds: "No. What's wrong is wrong, no matter who says it or where it's written." As the movie starts deepening into its central conflict, this divide between the two characters becomes crucial, as Nader relentlessly refuses to accept any culpability or pay for something he is certain he didn't cause, whereas Simin is willing to "bend things" if it'll help her family's well-being. How will the inevitable collision between these two characters' ethical compasses impact the resolution of the problem the family faces?

What makes A Separation soar in quality as a motion picture is that, in spite of the impression you may have gotten so far from my review, this isn't a droning exercise in moral philosophy, but rather, it's a film in which the dialogue and the situations continually move the film at a suspenseful pace towards its devastating conclusion. Guns and car chases can be fantastic in their own right at creating tension... but consider this simple, unscored scene in A Separation: One character testifies in front of a judge. We already know that the character isn't being entirely honest. The judge calls another character in, to see if this second character will confirm the lie. The second character does not know about the lie that was just told. Not only is this scene thoroughly nail-biting, but it's also a great point for us audience members to ask ourselves where we're at: Do we want the lie to be uncovered or not? To make matters even better, A Separation ends exactly where it needs to, not a second before or a second after. It chooses to leave one question unanswered, but it's a question that doesn't need to be answered, because the results will be grim and devastating no matter what the decision is.

As the separated couple, Peyman Maadi and Leila Hatami are not only perfect foils for one another, but they flawlessly help fashion the film's two-sided moral framework, which is never black and white. Both actors seamlessly create characters who are being hit in all directions and have to balance their daughter's emotional well-being, their own physical well-being and the family's financial survival. As the young, puberty-bound Termeh, Sarina Farhadi perfectly combines youthful vulnerability with wisdom and perceptiveness: you see, she's effortless at demonstrating the severe impact that the film's conflict has on her, but on more than one instance, she emerges as the character who catches most of the little details and who realizes how and why people are being dishonest. There are plenty of instances in which we see Termeh simply sitting and observing while everything she's watching quickly falls into chaos. But the best performance in A Separation, by a mile, is the one given by Sareh Bayat. It's not unwarranted that you'll frequently go from thinking she's a mean-spirited liar to feeling sorry for her situation, and then back again, until the end of the film, when you'll probably feel she's just as much of a victim as anyone else who gets entangled in a situation like this. Consider the scene in which Bayat literally begs the judge not to write down what he's about to write down, and she nearly pulverizes from the desperation. It's the kind of scene that the best suporting actress Oscar was made for, and it would most definitely be under consideration if the Academy's asinine politics didn't hinder this film's chances in all categories except Best Foreign Film.