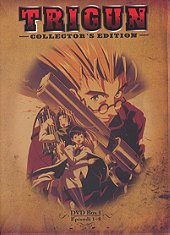 I have to admit, I went into Trigun not expecting much from it.
I had only seen bits of pieces, and from the little I had heard about it, it was a silly action comedy. I had always wanted to see it just for the hell of it, thinking that it would be stupid but at least enjoyable.

But man, I had no clue. After the complete tonal shift around episode 12, I knew I had gotten myself into a much bigger show than I was expecting.

But let's start from the basics: how it looks and sounds.

I'm not much of a stickler for the more technical details, so it doesn't ruin a show for me, but there were some technical aspects of the show that got distracting. The animation ranges from being average to choppy. It cuts quite a few corners at times, especially in action scenes and through reusing flashbacks. Also, proportions and backgrounds are sometimes off, as well as unreliable character models. If you're a snob for animation quality, this may bug you more than me. All in all, I guess it is acceptable for a late 90s anime.

However, the sound design (which I am totally snobby about) is wonderful. It has one hell of an amazing rock, bluesy, occasionally avante-garde soundtrack by the always amazing Tsuneo Imahori of Seatbelts fame. The dub is quite good, especially by Johhny Yong Bosch, who in my opinion outshone the original seiyuu. Some of the minor characters are a bit hammy, but all of the major characters do an amazing job, and many of the more dramatic moments are made 10x better by the voice acting alone. (I haven't watched much of the original Japanese yet. What can I say, I'm a sucker for dubs.)

What really shines here are the characters. The characters are among some of the most sympathetic and interesting I have seen. I was surprised at how much I cared for them so early on in the story, and that in itself is a sign of great character development. Vash in particular is an incredibly fascinating and well-rounded individual that definitely does not fit into the typical hero archetypes. Even though he scores a mighty 50-72(!!) on the Mary Sue Litmus test, he somehow works.

The other mains (Meryl, Milly, Wolfwood, Legato, Knives, Rem) are fascinating, 3 dimensional characters as well. In fact, it has influenced me to go out and buy the manga because I want to know as much about them as I possibly can. To me, characters are the most important aspect of storytelling, and Trigun more than masters the art.

The exploration of different moral philosophies is tastefully done and well thought out. It never feels like its preaching, and thank god for that because it could have gone wrong in many ways. The Biblical references are subtle and well done, however some people may find Wolfwood's gigantic cross-gun offensive. (I personally think it's fucking awesome, but moving on...) But I'm not going to pradle on about that because philosophy and all that jazz isn't really my trade (obviously).

The drama that occurs more in the latter half of the series is especially poignient and tear-jerking. I don't usually like using vague terms, but the show has a lot of heart and spirit to it. Even when mass populations are killed off, it never seemed heartless or without a point to the plot.

Because I want to keep the review relatively spoiler free, I'll stop there. All in all, it has actually become one of my favorite series I have ever watch, and trust me when I say that I was not expecting that.