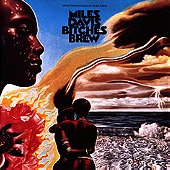 This is an album that helped get me into the jazz-funk and fusion style of jazz. It's a landmark album that set a standard for things to come. Pharaoh's Dance is a 20 minute track that starts off very mellow with organ notes, timid drums and light saxophone play. Pretty soon Miles and his trumpet enters and the pace picks up. The track never gets to heavy and it pretty chill overall. It's one of my favorite on this album and I'm a big Egyptian fan so it's even easier to like it more. Getting to the title track, Bitches Brew, this one is a lot different. Miles uses echo in his horn from the start with simple blasts here and there and being that this track is a massive 27 minute long you expect it to build up, and it does! After a couple minutes a light bassline comes in and track progresses from there. It doesn't change a whole lot but it's still a fun track.

The other half of this album I tend to like a bit more. Spanish Key is another great epic track at 17+ minutes long. I like Miles's horn in this one a lot and the track is pretty heavy at times and picks up speed right away. It never lets up. The next track, John McLaughlin, is of course titled after the great guitarist on this album and it's a cool little 4+ minute number that doesn't really escape from the other tunes on the album but it holds you down and keeps me interested enough to hear John's great fusion plucks. Miles Runs the Voodoo Down starts off pretty slow moving and is probably my least favorite track on here. It does pick up a lot and gets pretty good near the end though. Sanctuary, again, starts off slow but it's pretty moving and Miles trumpet is beautiful on here. A great ending to a good album.

The best thing about his album is that is doesn't sound rehearsed, it's sound like the whole thing was done live and improv and maybe it was. That's why I like it so much. Some people get tried by the long track lengths but if you want an album to chill out to while reading or playing a game this is a good start. Be patient and let the fusion carry you away. Having the bonus "radio" versions is cool and the DVD live perfomance is a bonus as well that I was so glad to finally see.