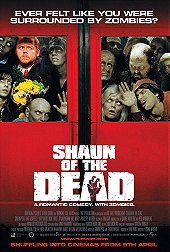 Shaun: Do you want anything from the shop?
Ed: Cornetto.

A man decides to turn his moribund life around by winning back his ex-girlfriend, reconciling his relationship with his mother, and dealing with an entire community that has returned from the dead to eat the living.


''Who died and made you fucking king of the zombies?''

The great British sit-com has undergone something of a revival in recent years. Galvanized by the new wave of smart, sassy imports from the US, the Brits have girded their loins and produced a spate of quality comedies that have banished memories of the bland, identity dross of the late eighties and early nineties.
Shaun of the Dead is the continuation of what went before; of a similar format yet in a completely new setting, with new characters, plus new cast members and for the first time a feature-length run time for the big screen. So how does it play out? Even with such a departure from the original setting, the history of TV to cinema adaptations is a dodgy one to say the least. Fortunately for those of us who already fans or (more likely) if you've never seen the series before, prepare to be impressed. 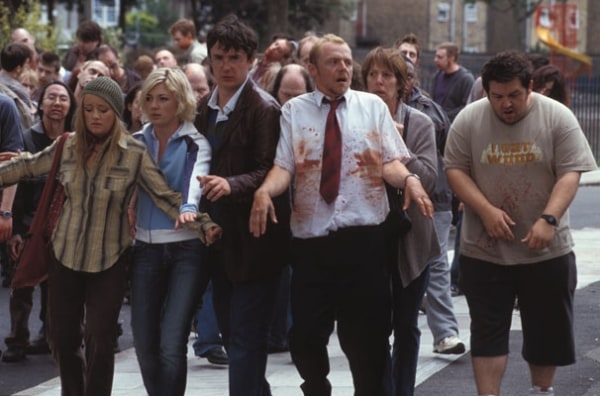 The style is all it's own. With inventive direction and editing making the visual impact which fans will instantly recognise, to the writing which importantly is firstly genuinely funny, interspersed with references to popular culture of the past two decades, always with a self-knowing grin, a wink to the viewer rather than a pretentious nod. And of course several self-references and in-jokes of the TV series all fill in the gaps between the tastefully presented killings. There is blood, after all this is a "rom-zom-com" or "romantic zombie comedy" - a self-proclaimed new genre and rightly so. This is as about as original as it gets. They actually manage to pull off humour, violence, decapitations, action, romance, suspense, sadness and joy all within the space of 90 minutes.
Spaced, a wholly original and delightfully quirky comic bagatelle which has built up a small but dedicated following in the UK. Now writer/actor Simon Pegg and director Edgar Wright have teamed up once again to give us Shaun of the Dead which is, in a nutshell, a feature-length episode of Spaced (with added zombies). Happily timed to coincide with the Hollywood remake of the 1978 classic shocker Dawn of the Dead, Shaun is the perfect antidote: Irreverent, warm and very funny.

Shaun is your stereotypical sit-com loser: An ineffectual slob in a dead-end job, he is terminally afraid of commitment and spends all his time with his flat-mate Ed (Nick Frost, also from Spaced) who is an even bigger loser. After his girlfriend dumps him, Shaun and Ed seek solace in their local pub the Winchester - a good old-fashioned English hostelry with warm beer and pork scratchings which is infamous for its lock-ins. They stagger home in a state of advanced refreshment, unaware that the dead are now walking the earth. Indeed, it takes Shaun a little while to work it out the following morning despite interacting with a few of them (one of the recurring themes is that most of us go through the drudgery of our daily routines in a trance close to inertia).

When the penny drops, Shaun resolves to rescue his mother and his (ex) girlfriend and generally stand up for himself for the first time in his life. There is not much more of a plot than that. The film, like Spaced relies on a flawless script, observational humour and the theatre of the absurd. Pegg has perfected this in his writing but he is also a surprisingly good actor. It helps that he has surrounded himself with the pick of the British comedy fraternity who seem to have been lining up (literally in one scene) for a cameo. The stars of similarly acclaimed series' such as Black Books, The Office and Little Britain are all on show here as well as Jessica Stevenson, Pegg's Spaced co-writer, who plays a jolly-hockey-sticks human vigilante with a stiff-upper lip and can-do attitude ready to give those nasty zombie's what-for.
Veteran support comes from Penelope Wilton (a sit-com stalwart from a bygone age) as Shaun's curtain-twitching mother and Bill Nighy as her fearsome second husband who performs one of the most dignified and poignant descents into zombieness ever caught on camera.

Despite all the high praise, it must be acknowledged that Shaun of the Dead is still a spoof - a comic tool that you could argue is as low a form of wit as sarcasm. But where it scores highly is in its respect for the original material. Most spoofs (the Scary Movie franchise, for example) are vicious lampoons that unmercifully mock the films they are taking off. Shaun of the Dead gently pokes fun but doesn't lose sight of the fact that if something is worth parodying, it must have some merit. Pegg is also careful to ensure that his film can stand up on its own - there is barely a minute goes by without a very good joke and despite the light-heartedness, there are some satisfyingly scary moments and ample gore.

What is most encouraging is that us Brits have started playing to our strengths. It took a long time for comedy writers to realise that making an English version of Friends is doomed to failure (in the same way that The Office will not work with an American make-over). We should celebrate the Britishness of this film, laugh knowingly at the in gags, and be proud that it doesn't take a huge budget or movie stars to entertain people at the cinema.

Ed: There's a girl in the garden.
Shaun: What?
Ed: In the garden, there is a girl.