Review of The Butcher 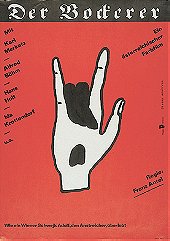 Austria, with its Jews, Germans, Czechs and so on is also infamous for its special dark charme and humour. And a Švejk-like naive butcher finds his way through the times of the Nazi-Reich. The familiar problems show the other side of Nazism and makes the resilient butcher a unique person. The cruelty is evrywhere and the Bockerer still belongs to the normal ones.
He doesn't let the "progressive new system" and the zeitgeist destroy the friendship to his socialist friend and the jewish friend... but his own son is in the Nazi-uniform marches with the SA.
In a tragically funny way shows the film how absurd a lot of the dictature is ... this made the movie a succes in eastern germany... where people also tried to live their normal life underneath the radar of a repressive system