The Girl with the Dragon Tattoo review
711 Views
13

The Girl with the Dragon Tattoo 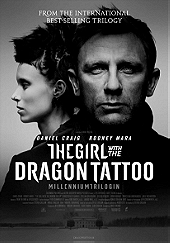 The title character in David Fincher's latest cinematic venture is a ferociously dark soul, a hellishly badass girl down to the very core of her being. She's also savagely intelligent and resourceful, a computer whiz who can literally hack into anything whenever she wants to, but even worse, if she finds out something about you or if you pose any sort of threat to her, you're in for nothing but pain and agony. And she WILL find you. This is one of the most fascinating characters I've had the admittedly perverse pleasure of meeting at the movies in 2011. What a shame it is that the context in which we get to meet her is that of a murder mystery that, despite being stylish and despite having a running time of 2 hours and 38 minutes, is as interesting as the murder mystery you'd encounter in your average police procedural on primetime television. If The Girl with the Dragon Tattoo had truly been a story ABOUT this girl with a dragon tattoo, if the film had delved deeply into her background, and if it had given us more than the superficial look that we get here at her harsh life and at her sexuality, we'd have a hell of a story, one that I'm confident Fincher could've turned into a cinematic gem. But the film follows the source material, which actually relegates a character as amazing as Lisbeth into an almost secondary role, and it focuses on a story that's engrossing enough but way too far from the dark character study this could've been.

You see, Lisbeth (Rooney Mara) works as a researcher for a company that's in charge of basically finding out people's dirty laundry. She's their best investigator, but they try to keep her a secret, because she's what many would call unorthodox, sporting a totally gothic look with piercings in different places on her face. So, rather than working at the office, she does all her sleuthing and hacking at home, and only goes to the office when necessary. We soon find out that Lisbeth had a really difficult childhood and that she was institutionalized at one point, so she has a legal guardian who's in charge of her. Apparently, her legal guardian had a great relationship with her and was even nice enough to let Lisbeth handle her own finances, but when he suffers a stroke, Lisbeth is assigned a new guardian... and well... it'd be an understatement to say that, this time, Lisbeth isn't as lucky - and that's as much as I'll reveal, considering the fact that the dynamics of what goes on between Lisbeth and her new guardian offer the film's most searing and audacious material. Later on, Lisbeth's skills garner her an offer to work as an assistant for Mikael (Daniel Craig), an investigative journalist, to help solve the apparent murder of a girl named Harriet Vanger who's been missing for decades. The crime took place on a remote island, and there's a suspicion that the culprit may have been a family member of Harriet's. Both Lisbeth and Mikael are cunning researchers who would normally have better things to do with their time. But each of them has a motivation to work on this case. Mikael was recently involved in a legal scandal that tarnished his reputation, so getting away to a remote place seems like a great idea (plus, solving this case may even give him some redemption). For Lisbeth, considering what she's gone through in her life, getting the chance to catch someone who murdered a young girl is just too tempting.

It takes about an hour of the film's running time before Lisbeth and Mikael actually meet each other. The contrast between the quality of the scenes involving each character couldn't be more stark. The Mikael scenes are sufficiently engaging, but every time Lisbeth appears, she burns up the screen with her menacing, reticent persona. Consider a moment in which the film cuts back and forth between what's happening to one character and what's happening to another. Lisbeth is exacting sweet, horrifying revenge on someone, while Mikael is... well, I don't remember what he was doing anymore. I just remember getting a very "meh" feeling and praying for the switch to Lisbeth to happen as soon as possible. So, in a way, when Lisbeth and Mikael finally meet, it represents the end of the greatness that this film could've aspired to, as Lisbeth becomes an aide in a whodunnit that's rather lackluster and doesn't have much of a surprise in store for us. In fact, the solution to the mystery of Harriet's death comes more from an exercise in playing "Where's Waldo?" than in any sort of interesting or substantive discovery. To make matters worse, the film is too long by about 30 minutes, and the final act feels very protracted, where a tight epilogue would've been more efficient.

Still, the presence of this utterly fascinating character throughout the majority of the running time is certainly enough to make this worth seeing. There's a fantastic early scene that takes place at the escalators of a subway station in which Lisbeth's badass persona is put on display in a quiet yet aggressive way. I think that my dissatisfaction isn't just limited to how I feel about the potential that this film had to be great if it had focused less on the mystery and more on Lisbeth's life. I think I'm also feeling a dissatisfaction that's similar to what I felt last year after watching the Coen brothers' version of True Grit. In this case, it's all about the fact that I know Fincher is capable of making something fantastic out of raw material like this, as he did masterfully in Se7en and very well in Fight Club. In Se7en, Fincher's examination of humanity's filth and all the moral questions that came into play always took precedence over the puzzle that the two detectives were trying to solve. It's too bad that we can't say the same about The Girl with the Dragon Tattoo. And it may be easy to rebut this by saying that he had to work with the source material, but my answer is that if you're making a film adaptation and your source material is weak, either don't make it or do something drastic in order to mold it into something great. But that wasn't done here.

Rooney Mara loses herself in Lisbeth's wretched, deeply tortured soul. You'd be forgiven if you felt surprised to find out that this is the same girl who traded verbal fireworks with Jesse Eisenberg last year during the opening scene of The Social Network. Lisbeth may not have long lines of dialogue, but she can convey the fire of hell with her penetrating gaze. Daniel Craig obviously has the less demonstrative role, but fares remarkably well without letting his celebrity status steal the spotlight from Mara. Part of me was concerned that the Swedish accents would be an issue, but the interesting thing here is that, apparently, Fincher had the actors affect an accent that didn't feel too pronounced, to the point that sometimes Mara strays right into American pronunciations, but it feels like a conscious choice rather than a mistake, and I preferred it that way anyway.

I find it incredibly perplexing that we've been deprived of the opportunity to get to know such a fascinating character on the profound level that we deserved. Yes, Lisbeth's involvement in the investigation helps to further show us what a great researcher she is, but there are clearly so many more layers to her personality that are suggested (from her experiences with her parents when she was a child to her criminal past to her sexuality) yet left completely unexplored. I know that it seems wrong to assess a film based on what it didn't do instead of on what it did, but I AM assessing The Girl with the Dragon Tattoo based on what it did, which is present us with a serviceable murder mystery that'll certainly pass the time but nothing that'll sear into our brains and souls. At one point during the film, Lisbeth angrily complains to Mikael about how much time she's spent working on the case, and she says "Because you and Harriet Vanger have kept me busy!" They sure did, and I wish they hadn't. But getting the chance to at least superficially meet Lisbeth makes the film worth a passing grade.