The Day the Audience did not sit still..they left. 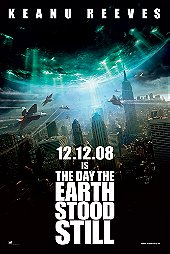 A remake of the 1951 classic sci-fi film about an alien visitor and his giant robot counterpart who visit Earth.

To start with I never had any major expectations upon seeing The Day the Earth stood Still. Initially it's an effect laden disaster movie disguised as an Alien encounter of sorts, and of course it's a remake of a major Classic B&W film with a deep message between it's lines. This is the beginning problem with this new project, combined with a typical cast and a routine battering of pointless plot. The Day the Earth stood Still begins very slow and this is the start of it's unraveling, and ultimately it's predictable demise. I was willing to give this affair a chance, give it a shot per say, for criticizing it or knocking it before viewing would perhaps be unfair. Now I wish I hadn't bothered but at the same time glad I've got it over and done with.

At it's core it's got some good points, obviously the plot isn't one of them or the depth. It's effects and visual efforts are very impressive, which almost disappoints me in the fact it hasn't the story to support these lush renderings. For instance we have the huge spheres of light artistically stimulating and a huge metal man guardian who are either under used or misused with the ongoing script occurring. The Day the Earth stood Still plot has been done so many times before that it's almost a crossbreed between The Happening, Independence Day and even having a resemblance to Spielberg's Close Encounters of the third Kind. I mean The Day the Earth stood Still is a typical American goody two shoes movie, the center of disaster, the main sphere of destruction is, you've guessed it, in the good old US, Manhattan. I'm sick and tired of these disaster/Alien movies always having the main bloody event occur in their Homeland. To me this is just unbelievable and byaist, while also being very big headed.
Which brings me to yet another annoyance worthy of mention, the other countries shown in the Alien occurrence. The glimpse of London UK is disturbingly awful, which shows America's perspective of us to be a Taxi Infested city with Old people wearing stereotyped caps. Come on guys, this is the 21st Century here too, not the 60s. Also the middle Eastern Countries shown, are truly inaccurate, giving us the impression that all denizens in Egypt or surrounding Countries ride around on Camels and are primitive cultures. All this just shows how stuck up the film makers are and a diluted Western view we are given.

Keanu Reeves as Klaatu is another reason why fans of the original, will hate this intrepid re-make of pointlessness. He's got that type cast role, giving nothing new in a lifelessly wooden drab performance. We have an Alien beginning to feel empathy for the human race yet in fact the evolution towards this empathy is missing. Granted he has a few moments that are fun, like his control of technology, but it's all a mindless dizzying waste because there isn't enough life in the acting or the disposition of how Klaatu is represented by Reeves. The fault doesn't just lie with Reeves but with a weak script and a tired story of Alien Encounters that offers nothing new whatsoever.
Jennifer Connelly as Helen Benson, is the female star, yet this choice for her is a far cry from Blood Diamond, this is something she should of stayed clear from. Her performance isn't great, more of acting with her blue eyes and staring towards camera rather than adding any weight to her dialogue.
Kathy Bates is an annoying 2D character, Jaden Smith backs her up as another deadpan cop out, while John Cleese as Professor Barnhardt is meant to pass as a renowned Scientist type character. The film at this point becomes unable to be taken seriously in any regard, with miscast people, a mindless remake with dire consequences.

This could have been really amazing but it turns out to be as flat as a pancake and one of the worst disaster Sci-Fi excuses this year, or hell this decade.
The Day the Earth stood Still is a wonderful example of how a movie's effects alone cannot carry a lifeless husk of events along. As for humanity being able to change it's ways for this Planet, well don't make me laugh. The Day the Earth stood Still shows a stupid military and characters making some of the worst choices since Deep Impact, you can laugh when people get blown away, you can smile when bad atrocities happen, when metallic bugs eat away anything in their path, because it's all so laughable, so unbelievably executed and displayed, it's hard not to scoff at proceedings.