Seriously, what the fuck? 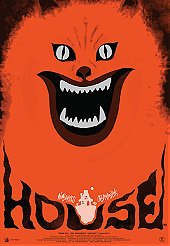 "The girls will wake up... when they are hungry."


If Sam Raimi was perpetually tripping on acid throughout every stage of making a movie, it would look something like this Japanese cult classic. Hausu cannot simply be classified as a movie, but a bizarre, borderline indescribable experience. Actually, words like "bizarre" or "weird" do not even begin to describe this flick - it's just plain crazy. And not crazy in a generic, loose sense - Hausu is the work of a fucking madman. Rather than a simple fantasy-horror, director Nobuhiko Obayashi has created something which adheres to no coherent filmmaking or storytelling rules. Hell, Obayashi said "fuck you" to the rules of planet Earth while he was at it. Hausu could be described as an mix of haunted house horror and a coming-of-age tale, but it's mostly a surreal why-stop-at-the-kitchen-sink-let's-throw-everything-we-have-on-screen-and-see-what-happens kind of "what the fuck" experience. 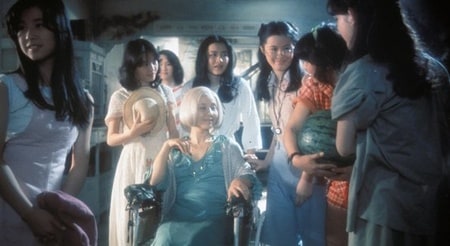 There's no coherent plot to discuss, so one can only describe the setup: a teenage girl (Ikegami) is disheartened to find out that her father plans to bring his new girlfriend on the family's annual summer vacation. Consequently, she rounds up several of her best friends and heads off to visit her aunt somewhere in the Japanese countryside. Everything seems peachy at first, but it turns out that the aunt is a spirit and her house is haunted. The house seems to come alive, and a series of strange supernatural events begin to overwhelm the innocent young girls.


Admittedly, Hausu takes a little bit too long to reach its stride, but the wait is worth it. The above plot outline barely scratches the surface of this batshit insane concoction, which is less concerned with plot and more concerned with how you can tell a story. Hausu is about the possibility of what can be committed to celluloid, and about experimenting with ways to baffle and overwhelm viewers. Due to its logic-deprived storytelling and feverish visuals, the film feels like a child's nightmare, and there's a good reason for this: the director's 11-year-old daughter Chigumi was consulted for the creation of several key scenes, and the story is credited to her. The only real flaw with Hausu is that the characters are too interchangeable and undistinguished. They all look somewhat similar and they lack personality, so the question of who's who becomes blurred as the lunacy unfolds. You don't really care about them either, though that was probably the least of director Obayashi's worries - he probably just wanted you to focus on caring about trying to retain your sanity. 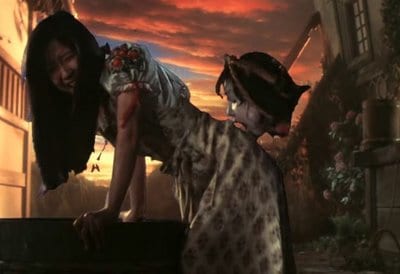 In order to satisfy the script's peculiar demands, Obayashi called upon an array of filmmaking and special effect techniques. The optical effects are crude due to their 1970s origins, but this is all part of the campy charm which makes Hausu so much fun. Obayashi clearly enjoyed experimenting with every technique available, resulting in a mishmash of practical effects, optical effects, skipped frames, wipes, animation (augmenting live-action material), different shutter speeds, slow motion, split screens, imaginative camera movements, time lapse, freeze frames, matte paintings, newsreel footage, and more, all of which were breathlessly combined to leave viewers absolutely dizzy. The inexplicable madness does not end there, with clocks vomiting blood, paintings coming alive, and even moments when characters dance to the score. Speaking of the score, it's similarly manic and over-the-top, with constant piano refrains and cheesy, bouncing music which makes one further ponder whether or not Hausu's makers are actually sane. Indeed, watching Hausu is the equivalent of stepping into an alternate universe that laughs in the face of physics and common sense.


Some have labelled Hausu as a horror film, but this label is too simple. The supernatural elements are the stuff of horror, granted, yet Hausu is too funny, colourful and boundary-pushing to just be called a horror flick. Due to its unique disposition, the movie won't work for everyone - some will no doubt find it too disorientating or weird for their tastes. But if you can tolerate and appreciate it, Hausu is an insane joyride of a movie that's as bewildering and inventive as it is entertaining.