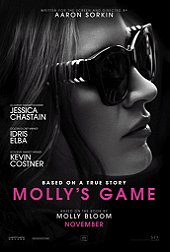 The film had very fast-paced dialogue that was hard to follow. I caught Idris Elba slip into a London accent once or twice which really hurt the believability of his character for me. I think I liked Player X the best because of his mystery. The lead character's intelligence and attitude were admirable but it felt unfair that she was strapped with so much debt in the end and may not have the opportunity to work again.