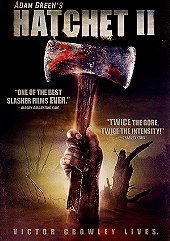 I wasn't too impressed with this one as much as I was with Hatchet. I only watched this one coz Danielle Harris was in it. The storyline itself wasn't bad, it was the special effects that ruined it for me. The kills were cheezy and badly done. For example ***SPOILER ALERT***

In the first 5 minutes of the movie a guy gets his intestines pulled out through his stomach and Victor Crowley wraps them around the victims neck and proceeds to pop his head off.

I had so much hope for this movie, especially after seeing the first one, unfortunately this movie was a major let down.