Confessions of a Superhero review
105 Views
1

Review of Confessions of a Superhero 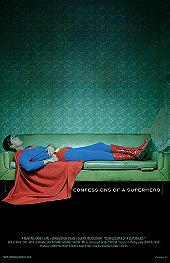 The premise of this documentary is what caught my attention.

I love how it follows 4 key 'look-a-likes' of whom I feel are 4 of the most important superheroes.

To be honest I was kind of annoyed with 2 out of the 4 of them.

Superman was just ANNOYING! I get it, you love Superman. Yea, you kind of even look like him... when you spend 2 hours on your hair and make up. Unfortunately I feel like he takes it too far. I understand he is obsessed, but come on. It gets to the point where its creepy. I have to admit though at the convention what he did for his girl was so cute :).

The other character I thought was annoying was Batman. He was so into himself it wasn't even funny. Sorry, dude, you don't look like George Clooney. He needs to grow up and come to grips that anger doesn't solve everything. It also touched on the fact that he might be mentally ill? It wouldn't surprise me. His sheer mannerism is what annoyed me about him. I can't stand people like the way he is. Which is a shame because Batman is awesome.

I did enjoy Wonder Woman and The Hulk's stories.

Honestly I thought Wonder Woman was hot ^_^ and fit perfectly with the way Wonder Woman should look. She was overall cute and bubbly, and the more you learned about her story the more heartbreaking it was. I felt like you could relate to her the easiest and was the most sane one out of the bunch.

The Hulk's story was heartbreaking as well. I feel so bad for people who try so hard just to have a roof over their heads and have to resort to living on the streets for a while just to get there. He has been through so much and can't seem to get a break. My heart goes out to people like that. It wasn't like he was caught up in some bad drug habit he had to work his way out of or anything. Bad things shouldn't happen to good people.

Overall the documentary taught me about how much shit these people go through. I know if I ever find myself on Hollywood Blvd. I am going to get a picture and make sure to tip these people because they have a very weird and stressful profession.

I enjoyed the fact that this documentary held your attention and makes you so interested in the lives of these people. It was a very worthy documentary