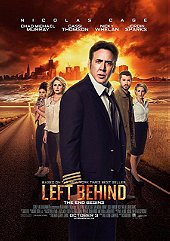 Obviously, I wasn’t expecting much from the damned thing but since it was available on Netflix, I thought I might as well check it out. I had heard of these hardcore Christian movies but it was the first one I saw (for some reasons, I don't think ‘The Passion of the Christ’ belongs to the genre because of its high production value but I might be mistaken) but I was rather amazed and even appalled by the end-result. Indeed, the whole thing was basically some massive propaganda garbage based on the Rapture and it is rather scary and depressing that some people would actually believe that something like this will happen in the future. I mean, if I did understand correctly, it doesn’t really matter if you are a good or a bad person, it only matters if you put your faith in God and then, and only then, you will be saved and sent to Heaven. But it went further than that, apparently, you have to believe in the ‘right’ God since a Muslim who seemed to be a rather decent man wasn’t spared because of his faith. At least, they had the decency to save all the children regardless of their beliefs. Otherwise, everyone else, the drug addict, the gambler, the capitalist, the adulterer, the investigative journalist, the cute-opinionated-student-with-a-big-mouth, they were all pretty much doomed but, on the other hand, what really happened? Allright, millions of people just disappeared  suddenly but would such an event suddenly bring the collapse of the World? I doubt that. I mean, with a massive natural disaster, a nuclear world war, an alien invasion or a zombie outbreak, I could understand why but I thought it was rather far-fetched that it would happen so fast in such circumstances. And, of course, the whole thing looked terrible, especially the cheap CGI, the performances were so weak and the dialogues were borderline laughable. To conlude, the damned thing was pretty bad and you should probably avoid it.