I want to play a game. 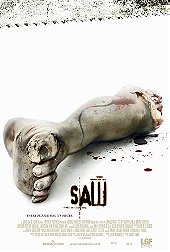 With a dead body laying between them, two men (Whannell and Elwes) wake up in the secure lair of a serial killer who's been nicknamed "Jigsaw" by the police because of his unusual calling card.

The original Saw, a film that was originally planned for a straight-to-video release but after receiving positive nods at pre-set screenings, was finally given the go ahead in October 2004, just in time for Halloween. Saw contains one of the those plots that shows you certain plot threads then twists them and distorts them for mouth watering results.
It's not hard to see why this almost hit the instant DVD release list. I mean, people will closely observe that it obviously contains similarities of its successors, namely Se7en (95), and that may be all the ammunition the haters will need to crush it. 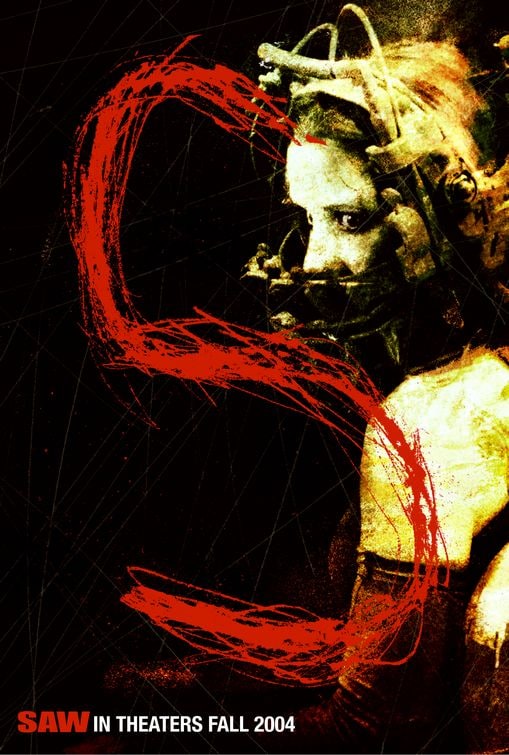 But I begin with assertions and an experience that Saw is a genius thriller, yet not exactly original or daring. The film does its best to exploit the claustrophobia and mounting tension that collects as it progresses.
This is a Silent Hill 2 similar venture in some ways, the hero even looks like James Sunderland from that game. Saw falls into the trap alot of franchises do, such as Matrix, Pirates of the Carribean, these films needed no follow up but due to Box Office and more money to spin they followed them on with sequels unequal to the effortless originals. Again this happens with Saw
Ironically, the title has alot to do with plot, a hooded psychopath who deals his own brand of justice, going by the name of Jigsaw, a puzzling anti-hero. A clever piece of the title, Jigsaw is,
The two main characters, the main players of the sick game at center stage, Lawrence (Cary Elwes) and Adam (Leigh Whannell, also the film' screenwriter) are the main focus here.

The two men awaken to find themselves chained to lead pipes in a decrepit public bathroom. In the middle of the floor, is a dead body that's surrounded in a pool of its own blood, with a gun in one hand and a tape recorder in the other. As it would turn out, they're the latest victims of a serial killer known as the Jigsaw Killer.
Jigsaw has a nasty little way of torturing his victims by trapping them in a situation where they have to kill if they want to survive. As Lawrence explains, technically Jigsaw is not a killer, simply because he hasn't killed anyone, the victims do that themselves. As one fortunate victim observes, who survived her ordeal, she is bound to a chair with a reversed bear trap-like device strapped to her head with pliers wired into her upper and lower jaws. A timer is on the device and if she does not locate a key before it runs out, her mouth will be ripped open and no more pretty face. In order to get out, she must open up the stomach of a dead man lying on the floor next her to get the key. 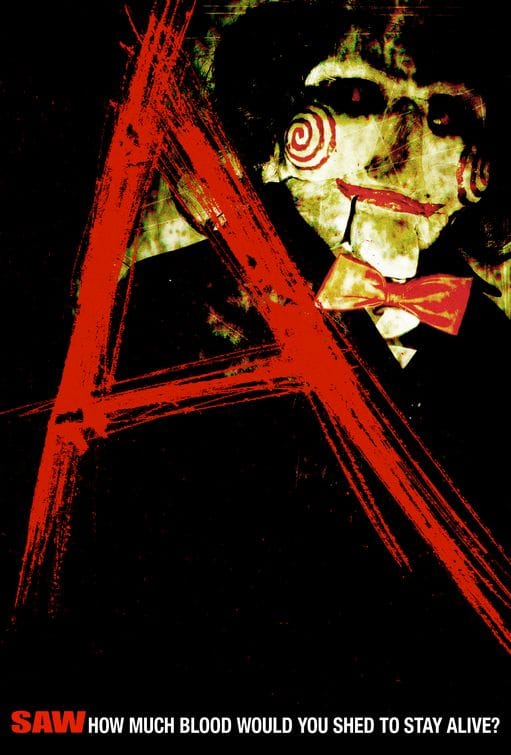 ''Face it Larry, we're both bullshiters. My camera, it doesn't know how to lie. It only shows you what's put right in front of it!''

As Jigsaw ever so carefully points out to his victims, he doesn't just choose them at random. To him, they're all perfectly immoral individuals and he uses their immorality to set up horrific situations where the victim rarely survives the trap; in essence, life is its own reward because Jigsaw's victims don't value it, as he explains to the one young woman lucky enough to fight through his plan. Also on the case of Jigsaw, are two detectives Tapp (Danny Glover) and Sing (Ken Leung), who bring forth the news of Jigsaw's previous victims in one particularly gruesome flashback sequence.

Lawrence is pretty well aware of the case of Jigsaw, as even once he was considered a suspect by the police. As you would have it, Adam is not especially trustful of Lawrence being that he seems to know a lot and is not reporting many details to him. They realize, however, that if they are going to survive this nightmare, they're going to have to play into Jigsaw's game, observe the clues he's willing to give them, and ultimately make it out alive. 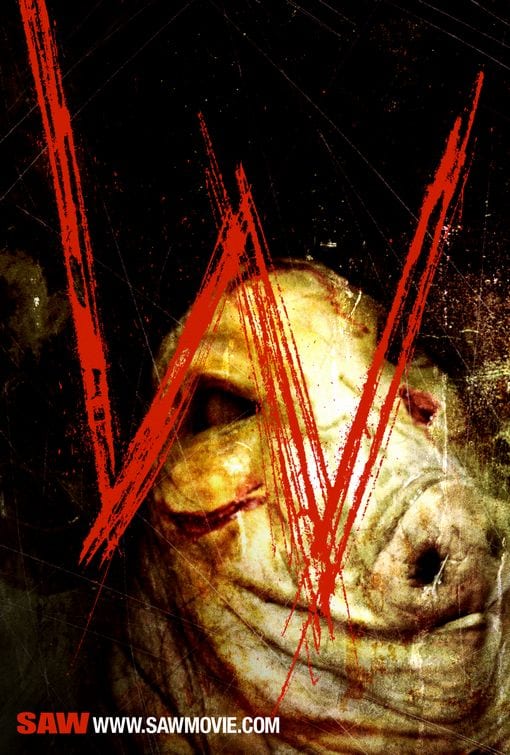 Saw was directed by James Wan and written by Whannell, with dazzling results who also makes an effective victim alongside Elwes. Elwes, a highly underrated actor, is given a chance to shine here, even though this really isn't an actor's movie, as it is more in the ball court of the director. However, we do get a sense of the desperation of the two leads, who soon realize that they're not the only ones trapped in this madman's puzzle.
The movie does benefit from its own moody atmosphere and vibes it sends forth, which may cover up any of the film's shortcomings. Towards the end, it does lose pace slightly, as events seem to go spiraling down the conclusion route, but quickly regains an injection of momentum as it draws to a climax.

But having said all this is Saw a genre classic? Certainly. Is it a classic like Se7en? I don't know. There's alot to consider when pondering a question that compares two different levels of movie making. I loved it, but the sequels that followed has everyone after a twist which kind of denotes that no surprise is in store for fans of the original. Granted this will always be the best of the franchise and that shocking ending is genius. So some poor acting and unrealistic traits let it down but Saw's mind set and ideas are phenomenal.
While Se7en was a blown up epic made for the big screen, this is a more small scale TV-styled mini project compared. Having said that it works and the feel and vibe also works too. Jigsaw raises some interesting questions about the complacency of society and shows that sometimes just a little push is sufficient to make individuals appreciate life and more specifically their own lives.


''Most people are so ungrateful to be alive, but not you, not any more...GAME OVER!''