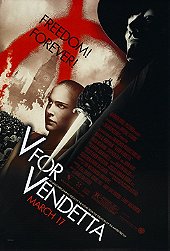 A shadowy freedom fighter known only as "V" uses terrorist tactics to fight against his totalitarian society. Upon rescuing a girl from the secret police, he also finds his best chance at having an ally and maybe a companion.

Set in a fascist controlled Britain, V for Vendetta is inspired by the graphic novel by Alan Moore. Resulting in this superb grand masterpiece, the film adaptation.
Scarily enough it also has parallels with what is actually happening now, and how this country really is on the same spiralling road into a hell of its own making. Notice the Gordon Brown look alike, the dictator Police-State, the controlling system, propaganda laden News and Terrorists being blamed for the own Governments evil doings. It's thought provoking aspects like these that make V a very interesting piece indeed. This paralleled state of existence not far from our blurry own.

The plot of V for Vendetta is surprisingly complex and expertly stitched together, and I don't want to divulge any juicy details.
Suffice it to say that a masked anarchist (Hugo Weaving) must save a young woman (Natalie Portman) during his attempt to expose a corrupt flawed government.
Weaving is perfectly cast, using his formidable physicality and imposing voice to give gravitas to the insanity of the character.
Hugo weaving although unseen behind the mask shows depth in his masked vigilante V, he portrays his emotion and passion.
Portman has gone from child to teen star and is finally emerging as a talented, adult actress following her Oscar-nominated turn in Closer, which I have yet to see. Here, she gives her best performance to date as the orphaned, Evey.
John Hurt is characteristically impressive as the enigmatic evil government leader, who's more of a dictator than a PM. Stephen Rea gives a wonderful supporting turn as the police inspector charged with finding V - before it's too late. Making us see a flip side and narration to proceedings.

''A building is a symbol, as is the act of destroying it. Symbols are given power by people. A symbol, in and of itself is powerless, but with enough people behind it, blowing up a building can change the world.''

The Wachowski Brothers former colleague, James McTiegue, takes on the directing tasks here and steers an enormously impressive first feature, using every means available, in a manner reminiscent of his mentors breakout hit The Matrix. Unlike Matrix, McTiegue allows the story to be more of a focus, and as a result the film is a tense yet emotional storm, with outbursts of spectacularly filmed and choreographed action. Showing more maturity and restraint than the Wachowskis ever did, McTiegue doesn't show off, and his trickery isn't self conscious. When slow-motion overtakes a late action sequence, it seems extremely natural yet believable. The late cinematographer Adrian Biddle (V is dedicated to his memory) does an outstanding job, Oscar-nominated Dario Marianelli's score is a fantastic accompaniment to the piece, setting your emotions ablaze like V, and the visual effects are astonishing, terrifying, and deeply moving, especially in the climatic moments.

With solid acting, great action, and fantastic technical wizardry, it sounds just like another Matrix clone. But the biggest difference in V is that it is a story of real ideas - not a fantastic, science fiction creation, but a genuine examination of the human condition. The power of fear takes centre stage here, the fear of war, of disease, of famine. Fear is a basic human nature, and has been exploited as a weapon, a method of control, for centuries. And for those who would use it against the innocent, a masked avenger waits in the shadows to deal justice and vengeance.

There was also a strange debate over the quality of adaptation the Wachowski Brothers offered to Alan Moore's original graphic novel. Moore has publicly separated himself from the film, quoting in the New York Times at the time, that ''the screenplay's rubbish''. Well, before we all walk away from the project, remember primly that Alan Moore will be the first to tell you himself that he is a selfish, pretentious prick. He knows it, we know it, enough said. Moving on... The screenplay's fine which you may have determined from what I have said already. In fact, it's again a masterpiece, and I cannot stress this fact enough. What the Wachowski Brothers have done is find the right balance between the theatrics of the graphic novel, and the solemnity to the richly Victorian narrative. They form a dynamic that plays to both sides, allowing for a story that sparks both political debate and giddy entertainment. We'll first shake our heads at the sentimental, soft-focus flashbacks and intriguing sub-plot for nuclear human experimentation but when mulled over, we realize it's just the comic book mentality showing its true colours. After all, V wouldn't start all his sentences with v-words had this film shunned its comic roots.

Revolutionary, thought provoking, V for Vendetta isn't just a comic book/graphic Novel adaptation but a political stab at the world we live in. Yet again a powerful idea can prove the most moving aspect!
Music is atmospheric and the scene with Natalie in the rain, with arms held high, in a pose of rebirth, is phenomenal, mirrored with V's rebirth by fire. Very emotional, very deep and hits home inside with its own humanity.
Ideas are bulletproof, says V, I say this film is bulletproof.