The Most Balanced Street Fighter Ever 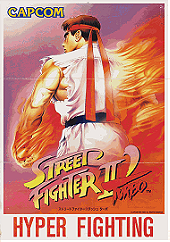 I've played a lot of fighting games during my lifetime. Mortal Kombat (2d/3d), Guilty Gear, Soul series, Tekken, Virtua Fighter, and just about every great SNK fighter I can think of to the obscure Bushido Blade had my attention. But the one game I would always return to consistently was the one and only Street Fighter II. It's the game that singlehandedly ignited my passion for video games, when previously it had been but a passing interest. It showed me the great potential this medium has to offer that can be comparable to film, music and literature in its artistic merit. In terms of richness of depth and simplicity of execution, it has no equal. Street Fighter II was and still is the greatest Street Fighter ever made. The amount of strategy you can employ in such a deceptively simple game boggles the mind. Its second revision, Hyper Fighting, was a distillation of all those elements that makes a great fighting game: great controls, balance, diverse roster of characters, unique playstyles, and open-ended gameplay.

Champion Edition saw major improvements upon the original. But certain characters like Guile, Dictator and Sagat were pretty overpowered. The absurd damage from their basic moveset to their inescapable block stun traps made them cheaper than a whore in a flat-rate brothel. Capcom noticed these power imbalances and sought to rectify them to allow a more level playing field. Thus, as a result of these crucial nerfs and other changes, Hyper Fighting became the quintessential Street Fighter II that we've all been waiting for. Whatever your style; zoning, rushdown, turtling, or a mix of the three, it's all there. Guile satisfies those areas to create a versatile game. He's my favourite for baiting shotokans to whiff their uppercuts.

Ryu became the highest ranked character in the game by most estimates. Not one single character has any serious advantage over him, insofar as it would lead to negative match ups. To outsiders, although Ryu and Ken seem like palette-swapped versions of each other, the differences are actually more than subtle. Ryu's recovery from throwing fireballs is faster than Ken's therefore he can throw them out at a faster rate. His spin kick is an immediate knock down, invincible during start-up and deals chunky damage. It comes out fast with huge hitboxes which makes it difficult to punish. His dragon punch doesn't travel as wide as Ken's, but in a game where keeping opponents at bay is paramount, this is where Ryu's fireball game shines brightest. Jeff Schaeffer argued that Blanka was the best, but I always felt he came up short against Honda. In fact, I get delighted whenever my opponent picks him, as countless Blankas have succumbed to my Honda online whom I'm a beast with. In his hands, Blanka might be God tier, but you've got to take into account how the other good players fare with him too. This isn't to say that Blanka has no counters on Honda, he most certainly has them. But to hurt my Honda you need to be a top top player. Otherwise, it's just business as usual.

Zoning is bread and butter in 2d fighters and all have their varying degrees of significance depending on the game. For Hyper Fighting it's practically essential that you have a powerful zoning and footsie game at the higher levels. If you can't control space and time your jumps with spot on precision, you're going to get beat down regardless of how pretty your combos look. Combos don't even figure that much despite being first discovered in World Warrior. It's all about outpoking and outchipping your opponent. Once Super Combos were introduced, this philosophy was gradually eroded as the series progressed. The games became more focused on rushing and closing down your opponents to pave the way for mixups. Huge lifebars cannot permit these drawn out battles of attrition, to drain it, you need to build up that super meter. For later games, I've got the feeling that Capcom were trying to achieve a middle ground between appeasing their old fanbase whilst wooing the Marvel vs Capcom crowd.

It goes without saying that Street Fighter II launched the fighting game genre and put video games on the map as a competitive e-sport. 26 years on, it still plays like a dream, more than you can say for games of its time and many that came after it.