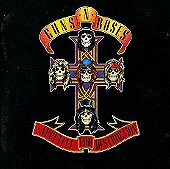 Never before or since has there been a more complete album than "Appetite for Destruction". Every track is highlighted with the incredible talents of Slash, as well as the many tones of the talented but troubled Axl Rose. From beginning to end this album rocks, and you want to hear every song over and over again. Not a weak song in the bunch. "Appetite for Destruction" is possibly the best album ever released, and certainly the best debut album ever. It's difficult to understand how this bunch of drugged up drunken tramps managed to come up with this magic, but they did it somehow! This is two-fisted, in your face rock'n'roll that ranks up with any album song for song, lyric for lyric, distaste for distaste. This is rock 'n roll. Too bad the Boys tasted success and forgot how to be a rock band. This album reeks of Jack Daniels and brings back memories of many a drunken party night!