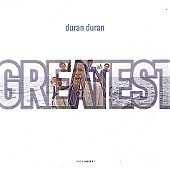 Pop music so intrinsically tied to its era shouldn’t remain this breezy and fun. Yet here we are with Duran Duran’s Greatest, a nineteen song retrospective of their Top 40-minded alternative-pop hits and strongest minor singles. What remains crystal clear is that they mined the same territory that Roxy Music and Bryan Ferry blazed, but they did it with aspirations of pop dominance, music video blockbusters, and arena-ready ear worms.

Greatest cuts off at 1998, leaving behind some of the later albums like Red Carpet Massacre and Paper Gods, but it offers more than enough sonic pleasures and bang-for-your-buck expertly chosen songs than any other compilation album. It’s the sound of the Reagan years written in frothy baubles about girls, exotic locales, girls, James Bond, and girls, possibly on film. What’s most interesting is how if you remove the sunny production values and layers of synths from the mix, then you’re left with songs that could easily transform into aggressive early-punk classics.

Yet Duran Duran remains the most iconic band of the New Romantic movement, taking the crown from contemporaries like Culture Club, Eurythmics, and Adam Ant, and that’s a group with equally strong catalogues of music. This is the sound of MTV’s emerging power to make or break music acts, and songs like “Hungry Like the Wolf” immediately conjure up their equally well-known music videos. Duran Duran were just smart enough, and frankly uniformly attractive enough, to marry their strong song writing skills to glossy images of beautiful models, jet-set glamour, and their own artful pouting in smart outfits. It’s thrilling stuff.

But Greatest does live up to its title, and reminds us that they wouldn’t have achieved such lofty heights if the material wasn’t up to snuff. Any band would kill for a “Rio,” “Come Undone,” “A View to Kill” (one of the few Bond themes to emerge as a gargantuan hit), or “Is There Something I Should Know?” That’s just a sampling of Duran Duran’s material on parade here. There’s artier, smarter choices in guitar riffs or lyrical refrains here than their hunky lads that ate models for breakfast image would project. They were paying close attention to Roxy Music’s teachings after all.

And if you wonder if this material really does deserve your attention, then think about newer bands like the Killers so clearly pilfer from their songs. Hell, think of how an album like Rio hasn’t gained a pound since 1982. Now imagine only the nuggets from roughly twenty years of hits and experimentations assembled for your pleasure. It’s a hard bargain to turn down.

The only knock against Greatest is its chronological disarray. We hop around between eras and sounds like the band is performing a concert instead of presenting the crown jewels of their singles. Yet one could argue that lesser-known or largely ignored songs like “Electric Barbarella” and “All She Wants Is” now get equal prominence with the likes of “The Reflex” or “Notorious.” Yes, chronological order would be better, but Greatest is still an essential collection of the brightest from one of the 80s biggest and best acts.