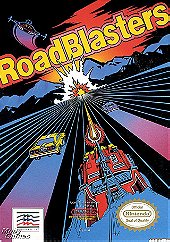 A personal favorite that survived the leap from the arcades.

Background
RoadBlasters was a car combat arcade cabinet of moderate-to-high success by Atari in 1987. Enough people loved sitting down in that cockpit and blowing away cars by the dozens that it made the jump from arcade game to home port on more than half a dozen home consoles and computers. Even the ill-fated Atari Lynx got in on the action. But for this review, I'll be using the NES version as my point of reference.

Beam Software (a developer for which I've always had very polarized feelings, though they've done me more good than harm) handled the port of the NES version for publisher Mindscape, who released it in early 1990. This was a time when Nintendo's MMC3 chipset was becoming common place and allowing developers to make more complex games with ease. Simplistic arcade games were on the way out and RoadBlasters went somewhat unnoticed because of it.

Presentation (Visual/Audio Aesthetic, Enjoyment and Effectiveness)
Within their hardware limitations, Beam Software put up an okay showing in the graphical department. Objects are detailed in a mostly consistent manner with shading and highlights. Obviously, it doesn't match up to the original arcade or newer consoles like the Sega Genesis, but it works well with what it has. Objects are easy enough to differentiate, which matters when you need to decide in a split second whether to shoot or dodge an obstacle based on its type. It would be nice if enemy bullets were slightly more visible, but since they only come from the turrets on the side of the road, the threat is still recognizable. Environments are otherwise repetitive, sparsely populated outside of items and enemies, and often yawn-inducingly monochromatic.

The audio is probably the largest flaw in the presentation. The original arcade game was no symphony, but a copied flaw is still a flaw. The basic sound effects are passable and do their jobs. There is no background music to speak of during the stages. Instead, you're only treated to the dulled hum of your engine. It does have some action to it, adjusting pitch as if revving up and switching gears, but doesn't quite have the peppy feeling of the sound in games like Rad Racer. I wouldn't normally pick on something so trivial, but without music, something has to set the mood, and it just doesn't.

Audio-mood aside, the game does give a sense of speed and action in its presentation. Stationary objects and things on the side of the road whip by pretty quickly at top speed and the vehicle feels like it accelerates up to an appreciable speed rather quickly. Explosions look good and contribute to the action. I am not a fan of the use of horizontal lines on the terrain used here and in many, many other games of the time. It is effective at its goal of providing a sense of 3D space, but accomplishes nothing that a well populated environment can't do with better aesthetics and less eye strain. It's just too busy.

Interaction (Controls, Menus, Intuitiveness and Responsiveness)
Now that I'm done bashing on RoadBlasters for its big weaknesses, I can move on to the things that make it great. While the home experience can never match the joy of sitting in the arcade cockpit with the wheel, pedals and triggers; it remains as responsive and easy to maneuver as the original. The car steers quickly and comfortably. It doesn't demand excessive speed management to navigate turns, allowing more focus to be spent on navigating obstacles and combating enemies.

One turn-off to some players is the necessity to use all four directional inputs to maneuver your vehicle. Because both fire buttons are busy handling weapons, up and down manage your gas and break. It isn't ideal and has been the birth of many thumb blisters. What are you going to do, though? The NES controller only has so many buttons.

The display panel at the bottom of the screen is large and easy to read at a glance, but not an imposing screen-hog. It has everything you need to know in a logical layout. The most vital information, your fuel gauge, is top-center, right below your vehicle. Less important information, like your score, gravitates towards the outer edges of the screen, away from the action. Subtle details like this are the nuances of great game feedback. Take notes, developers.

User Narrative (How design and challenges shape the experience)
Being a port of a late '80s arcade game, it shouldn't be a surprise that it has a late '80s arcade game feel. The gameplay has a repetitive, minimalist style to it that does little to reach outside of its narrow world. The beauty of these types of games is that these narrow worlds give the developers the ability to perfect that tiny world and explore challenges within those limiting rules in a way that is unquestionably addicting. At its surface, RoadBlasters is about a car shooting other cars as he tries to reach the end before he runs out of fuel. Simple? Yes. Mundane? We've seen car combat before. But it's in the refined details that this formula becomes something special.

At its core, RoadBlasters is about fuel conservation, in a very calculating, beautifully-violent sort of way. You have two fuel gauges, your main fuel and your reserve fuel. Main fuel is the fuel given to you for that specific track and is reset with each new one. Reserve fuel follows you from track to track and is only used when your main fuel runs dry. Fuel is vital. If you run out and can't manage to coast the last few meters to the finish line, the game is over.

Each track is littered with fuel orbs and enemies. Green fuel orbs refill your main fuel. They are not worth particularly much individually, but they add up and will most certainly dictate your path back and forth on the road. You can also get red fuel orbs that are sometimes dropped from destroyed enemies, though these will continue moving quickly and will zip off into the distance if you don't chase them at full speed.

Enemies come in a variety of forms and point values. Destroying enemies rewards you with points that are cashed in at the end of the level in exchange for more reserve fuel. Therefore, wrecking carnage on earlier tracks will help you in later, harder tracks. You also have a score multiplier, which starts at 1x and goes as high as 10x. Each enemy you destroy with your main gun increases it by one and each shot of your main gun that doesn't hit an enemy reduces it by one. Your multiplier at the end of the track will greatly influence the amount of fuel you receive, so accuracy is key.

Don't think for a moment that means the game is devoid of mindless carnage. Periodically, a plane will come overhead and offer up a special weapon. This will be either a fully automatic machine gun, screen-clearing cruise missiles, an invincibility shield or speed boosting nitros. If you are hit or find a new power-up before the limited reserve is spent, the left over is gone. Use it or lose it. Go nuts! Special weapons do not raise or lower your multiplier (so missing is not a concern), but they do earn you points, which translates to sweet, vital fuel reserves.

Enemies are capable of killing you in one hit, however that does little more than slow you down. You have unlimited lives and just pop right back in place of your pulverized predecessor. But since fuel works more like a timer than how fuel might logically work (i.e., going up in a fiery ball along with your car), you do lose precious seconds.

What this all amounts to is a game that is as stunningly beautiful example of a well refined risk/reward game mechanic as I can think of. Everything you do is in the name of your precious fuel. You drive fast to shave off seconds of fuel or to chase down a red fuel orb. You'll swerve between two bullet-proof cars to reach a row of fuel orbs. You'll run right up on the bumper of an enemy before firing your gun to maintain your multiplier, because it amounts to more bonus reserve fuel. Every move is a risk that, if it pays off, amounts to the fuel needed to go further through the 50 stages. If it doesn't, it costs you fuel, and brings the inevitability of a game over screen ever closer. Yes, the game is simple and repetitive, but it is challenging and absolutely amazing at what it does.

Summary
Under the unimpressive, simple looking exterior of RoadBlasters is an absolutely fun and addicting arcade game experience that has earned its place as one of my favorite games of all time. It possesses an element that today's games often miss. We've all experienced that moment, when the situation demands we make that split-second decision of whether to take a risk. Is the reward worth it? What will it cost me to fail? The window is closing and we have only the span of an impulse to decide if we're going to jump. It's inherent in all games, but do the mechanics promote those moments? They should. As I said before, developers, take notes. You can learn a lot from games like this.