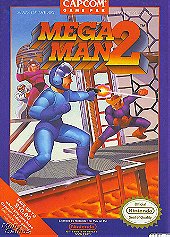 Mega Man 2 is considered, by and large, to still be the best game in the series, with Mega Man 3 filling a very close second. If you have never played a Mega Man game, you cannot go wrong with the second installment. So much of what the series became was perfected here. Future installments enhanced the formula, but at the expense of the refinement that comes with taking a simple, effective concept and polishing it to a brilliant luster. None of the original series was bad, but there's a reason Capcom turned to this game over all of the others when reviving the franchise with Mega Man 9.

Presentation (Visual/Audio Aesthetic, Enjoyment and Effectiveness)
Obviously, being an NES game of the late 80s, Mega Man 2 isn't going to win any graphical awards, even when placed against other games on the console. It does, however, have a very beautiful aesthetic. Capcom isn't afraid to work the whole color palette over the course of the game. Enemies and even terrain come in all shapes, sizes and colors. Creativity is allowed to run rampant, but stages manage to keep coherent themes throughout.

Metal Man's stage fits the feel of an industrial factory with cogs, drills, heavy mashers and conveyor belts throughout a tone of copper and steel. Heat Man's stage is a sewer with red-hot magma flowing through it, and has the appropriate red glow on the stone walls. Air Man's stage takes place in the clouds with enemies such as birds and robots with fans in their bellies trying to blow you off into the abyss while clouds occasionally block your field of vision. None of the early Mega Man games are slouches when it comes to level design and presentation, but these are some of the best.

Little needs to be said about the soundtrack other than these are some of the best tracks ever to come out of Capcom or video games in general. They're some of the most remixed songs on the Internet. Their melodies are strong, memorable and invoke humming long after the game is shut off.

Interaction (Controls, Menus, Intuitiveness and Responsiveness)
The controls are smooth and completely unobtrusive. This was before Mega Man would learn to slide or charge his blaster, so it's a purely jump and shoot affair. The game demands almost pixel-perfect jumping at times, so it's nice that Mega Man is so responsive to your commands.

If I had to complain about something, it would be that the weapon select screen had a lot of growing to do this early in the franchise. Rather than bringing up a list of all of your weapons upon hitting Start, you're presented with a list of half of your weapons. To see the other half, you have to choose "Next" from the menu. Mobility items like the hovering platforms, which you'll only use in brief spurts, are not in the same half of the menu as your default buster cannon. This can result in a lot of unnecessary button presses, just to switch back and forth. Each item is also only identified with a single letter or number. You eventually remember what everything is, but it is by no means user friendly. Mega Man 4 did a much better job in this respect, using the whole screen to show all of the weapons and much better feedback on what those weapons were with both names and pictures.

User Narrative (How design and challenges shape the experience)
Mega Man games are not the most challenging titles of the NES era, but they do require the time and effort to learn the stages and bosses. However, they remained accessible to even the most unskilled of players via a level select screen.

You have 8 robot masters which you must defeat in order to progress on to the last set of levels, but you can tackle them in any order. Since each master rewards you with a special weapon that will be highly effective against one or more other robot masters, the order you take them on can eventually be an element of your strategy. But for players who cannot defeat even one robot master, all 8 stages are still at their disposal. This is huge in an age of gaming where some games were so hard that you may have never seen the second stage, depriving you of that content. We often cheated, just to see the games we paid for.

This isn't a formula without flaw. The difficulty curve gets a little bent. The first robot master will typically be the most difficult, because you don't have any special weapons to exploit his weaknesses.

Within the independent levels, stage and enemy design is top-notch. Games of this nature require you learn the stage and boss patterns to a degree. Luckily, the content is so diverse yet consistent in execution that this comes pretty naturally over time. Stages are chunked nicely into areas with deliberate moments to catch your breath between challenges. This game is textbook perfect in terms of pacing. It may have even contributed to that textbook.

I felt some of the final stages contributed to the frustration factor due to some unintuitive moments, but this wasn't common-place. Infamous from this game, however, is Quick Man's stage. Most of the stage consists of beams capable of vanquishing you in a single blow, which you must avoid by controlling your fall through the level. There isn't much room for error, and you will die a lot at first. Thankfully, Mega Man is very friendly to the persistent gamer. If you run out of lives, you simply return to the stage select screen to try again or blow off steam on another stage. You have unlimited continues with which to learn the ropes.

Summary
I find myself reluctant to call Mega Man 2 a perfect game. It is, however, a mark to aim for when attempting to create one. For the vast majority, I am preaching to the choir. To those of you, I suggest you look a little deeper the next time you give it a play through. Notice the little things that make this a great game, rather than a good one. Analyze the level design and the kinds of variations that keep them interesting. Look for consistencies where ideas, concepts and content were intentionally reused. Look at the chunking of the challenges, whether they be single encounters or a gauntlet of jumps and enemies, and how the game segments them off from the rest of the level. Note how different enemies evoke different responses, or similar ones, and how they are placed in relation to their terrain. Nothing in this game is placed without a purpose. It's this careful design intended to produce a rainbow of sensation that we should expect from our gaming greats.

For the rest of you who haven't played it, you should get on that.