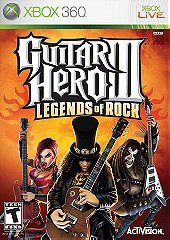 I think that this Guitar Hero is better than the first and second. Way better graphics. Changed the way the Gameplay looks. A very good selection of songs. The Career mode can now be played as Co-Op Career mode. Also when playing 2 players the game can tell if your playing with a guitar or controller. And the best part is that this features 2 actual people as playable characters. The characters of this one are Judy Nails, Johnny Napalm, Casey Lynch, Axel Steel, Izzy Sparks, Grim Ripper, Xavier Stone, and Lars Ümlaüt(Grim Ripper is not playable for the PS2 or Wii version and they got rid of Eddie Knox). This one has 7 new characters who are Midori, Elroy Budvis, Metalhead, Slash, Tom Morello, God of Rock, and Lou(God of Rock is not in the PS2 or Wii version. Elroy Budvis and Metalhead aren't in Xbox 360 or PS3 version. Slash and Tom Morello are the 2 characters who are actual people).

Songs I think were awesome in this game:
"Anarchy in the U.K."
"Before I Forget"
"Bulls on Parade"
"Cliffs of Dover"
"Cult of Personality"
"Knights of Cydonia"
"Helicopter"
"The Metal"
"Mississippi Queen"
"My Name Is Jonas"
"The Number of the Beast"
"One"
"Paint It, Black"
"Paranoid"
"Raining Blood"
"Rock and Roll All Nite"
"Sabotage""School's Out"
"Rock You Like a Hurricane"
"Slow Ride"
"Stricken"
"Story of My Life"
"Avalancha"
"F.C.P.R.E.M.I.X."
"Take This Life"
"The Way It Ends"
"Through the Fire and Flames"
"No More Sorrow"
"Jukebox Hero"
"Revolution Deathsquad"

Songs I think they shouldn't have put in this game:
"Sunshine of Your Love"
"Barracuda"
"Black Magic Woman"
"Even Flow"
"The Devil Went Down to Georgia"
"Kool Thing"
"La Grange"
"Lay Down"