Better than the first 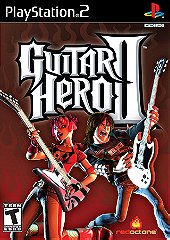 I love this one just like the first but there are differences that I like. The gameplay is obviously the same. The graphics got a little bit better. More songs are in this one. And they changed the way Multiplayer is played instead of having both people play the same difficulty both players can choose whatever difficulty they want to play, how cool is that. Also songs have gotten harder and faster. They also added a few new characters other than the original character roster(which is Axel Steel, Judy Nails, Johnny Napalm, Xavier Stone, Pandora, Izzy Sparks, Clive Winston, and Grim Ripper) they added 3 new people Lars Ümlaüt, Eddie Knox, and Casey Lynch.

Songs I think they shouldn't have put in this game:
"Can't You Hear Me Knockin'"
"Girlfriend"
"Tonight I'm Gonna Rock You Tonight"
"You Really Got Me"
"Fall of Pangea"
"Laughtrack"
"Yes We Can"