Have you seen Saw? 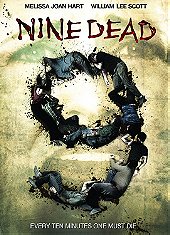 I knew Melissa Joan Hart was in this, but when the film started and I saw the logo screen for "Hartbreak Productions" (her company) I had a much better idea what I was in store for. And it pretty much delivered.

It's basically a poor-man's version of Saw, in every way. The plot is interesting enough, but only if you haven't seen the real mccoy. The acting is barely acceptable, but I can't figure out if that's more because of the caliber of the actors or just the crappy script they had to work with. The dialogue is so poorly written, it just ends up being downright hokie a lot of the time. More often than once, I was taken out of the moment and reminded I was watching a movie with actors pretending and reciting lines...never a good thing for a film.

Some of it was predictable, other parts weren't so much, but even those tidbits you didn't completely see coming were overshadowed by how lame they turned out to be once they happened. Obviously the plot is that they have to figure out why they're in the room, which is a great concept, and the possibilities are endless in terms of what you could do with it. And of course, our Clarissa-turned-hardass-prosecutor vehicle ended up coming up short. Surprise surprise. I don't think I'd be spoiling anything to say they're all related in some way, as of course the how is what they're supposed to figure out. But when we finally find out the answer, in actuality their relationship is so sketchy it barely makes any sense. You end up saying "that's why that guy was there? He fits in because of that? Give me a break."

It also tries to do a nice "all come together master plan" a la Se7en, but they don't establish it enough, and you can't even be sure it was part of the plan.

And the ultimate ending just sucks.

Couple of useless trivia bits I noticed...one is that Melissa's character is named "Kelley", which she spells out with the two e's for everyone to see in the film. However in the credits it's spelled in the more popular form "Kelly". (I told you it was useless). The other one is that Melissa still looks pretty much the same as she always has in the face (although she's much paler in this film, but that could be partly because of the lighting in the dungeon room)...but she's certainly developed herself a decent size lady pooch. (For those who aren't familiar, this is the the fat pouch above a woman's vagina that looks like a fanny pack under her pants. It is most commonly seen covered with "mom jeans".) However, in this film MJH plays a district attorney, so of course she's all business, and happens to be wearing a blouse tucked into a wool skirt. This of course is one of the worst possible ensembles for a woman with a lady pouch, as instead of hiding it, the outfit works to accentuate it and make it even more prevalent. This is exacerbated even more by the overhead lighting of the dungeon room, which forces a shadow to appear on her upper thigh and crotch area.

Why do I mention all of this? Because it's the only logical explanation I can think of as to why Melissa's character all of sudden decides to untuck her blouse 30 minutes into the film. The act is even given special attention by the camera, so that it can be assured the audience sees her do it (I suppose to avoid any thoughts of script discontinuity). But even with that kind of attention given to authenticity, no reason (stated or implied) is given for it. Are we just to assume she didn't feel the need to be "business" any more, and wanted to be more comfortable before she died? I'm not buying it. I'd be willing to bet the film's budget that that move wasn't in the script, and Hart wasn't just trying to be a lively actor and give her character something to do. I think she knew exactly what she was doing. (And I'm not saying she did or didn't die, I'm just saying getting killed was the expectation of all the characters in the room).

All in all it was a decent enough movie, I was entertained through most of it, even if I did come away with a disappointed taste in my mouth. I give it a 6, but I might have gone lower if it hadn't been so long since I'd seen Saw.