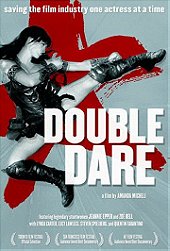 On the not-so damsel in distress:
It has always been my supernatural dream to be a villainess. Their super high boots are love. And then I get to have a flashy costume. But gah, I hate capes and other paraphernalia of no significant usage. If I were to be a superhero, I’d like to be Catwoman because I love eating fish meat, duh. But seriously, I adore Uma Thurman as Beatrix Kiddo.

On doppelgangers:
Double Dare is a masterful documentary of two marvelous stuntwomen. Jeannie Epper doubled Lynda Carter as Wonder Woman and my girl Zoe Bell doubled Xena. Jeannie Epper is not as pretty as the real Wonder but she definitely kicks ass and so she’s way cooler than Miss Carter. Zoe, on the other hand, was just 18 when she doubled New Zealand’s most famous heroine. Masterful! Later on, Jeannie Epper, who’s already a senior citizen now, for cripes’ sake, still does stunt acts. And my girl Zoe Bell, as you may all know, doubled Uma in Kill Bill. Zoe also starred in Tarantino’s Death Proof. I fell in love with the gal’s coolness in that flick.

Postscript:
I’m giving this ten action-packed stars since I adore Zoe Bell, obviously. I am not a fan of documentary style flicks but this one did not bore me. I usually hate it when Tarantino has a cameo role in his or Rodriguez’s movies but here, he has the right to be since he hired Zoe for doubling Uma. I super like Zoe Bell’s personality. What she was in Death Proof’s Zoe Bell, that is her in real life: crazily daring and utterly cool. She’s ultra-down-to-earth! She’s pretty, she looks like Kate Hudson and Drew Barrymore. And yes, yes. She’s the coolest woman I know, as of now. Double dare, pinky swear!