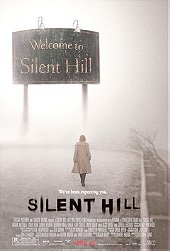 Honestly, I had never played the game so I had no clue if this movie was faithfull or not (I definitely want to try the game now after watching this flick). Anyway, after seeing it twice, I still keep thinking about this flick. First of all, there was this impressive introduction when, with no delay whatsoever, you get to see this mother running outside and shouting for her daugther. This scene was so striking, it put me right away into this movie. Furthermore, I was above all impressed by the directing which was pretty amazing and I was rather blown away by the scenes when you hear those sirens. Indeed, it was visually really impressive and I really had the feeling that Hell literaly brook loose. Honestly, those scenes were the best nightmarish moments I have ever seen in a movie. I have to admit it, the story didn't make much sense, especially towards the end (why do they always try in American movies to give some rational explanation when something completely preposterous is going on?!? Asian movies never have this issue and just go with the flow...) but, as a visual ride, I thought it was really satisfying. To conclude, I really enjoyed it, in my opinion, it is a really underrated flick and it is definitely worth a look, especially if you are looking for a decent movie around a video game adaptation.