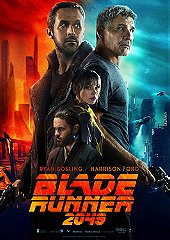 I am absolutely not sure where to pinpoint my feelings about this film. The fact that a person of my enthusiastic taste could be in the minority below ten thousands of bemused cinephiles and rank it slightly below such messes as Valerian and god forbid My Little Pony perplexes even myself. But rather than just wait a hundred years for Letterboxd to come to their senses about Sony's ugly splotch of a poster, I'll just have to come clean as I stand.

Blade Runner 2049 is nothing like its predecessor, and in a time when Hollywood sequels are factory-made to replicate one another, a director being given freedom to incorporate his own vision should be a miracle. For one thing, Ryan Gosling’s character arc is heartbreaking, and every scene with him trying to figure out real love is nothing short of incredible. His fight scene with Deckard is incredible. All the tracking shots of holographic advertising reminding him constantly of his isolation are incredible. The ending is incredible. Deakins is incredible, of course he is. It’s an incredibly human parable set in a future that very well could be.

Yet at the same time, Villeneuve cannot escape sequelitis no matter how hard he or his DOP try. For instance, there's the last-minute composer replacement which doesn't deviate the film from whatever else is bent on aping the atmosphere of Syncopy at all, the typical filmmaker's struggle to exaggerate what made the original so unique, and an overabundance of monotonous whispering passing off as acting that for 163 straight minutes becomes a chore to get used to. As for the villains, nobody will ever match Batty, let alone Pris, but that doesn't mean the antagonists should be nearly as uninteresting as how they were depicted; I don’t know what the hell they were thinking casting a guy whose perception of acting is Jackass-calibre tomfoolery. It ends up feeling somewhat pretentious, even as a standalone piece of art, and at 46 more minutes than its predecessor overworked.

Or was I expecting too much having thrice been drawn to the philosophical nightmare Ridley Scott's masterpiece was? Maybe I was just inclined to disappoint myself based on hype? Or did the film itself really head into the wrong direction? Am I even a real cinephile at all? Well, for one thing, if Villeneuve's intent was to challenge my self-perception, then he damn well succeeded. Whatever the case may be, I for the time being will remove my rating until I ever see it again.