Rise of the Planet of the Apes review
34 Views
0

Could have been better, still pretty good 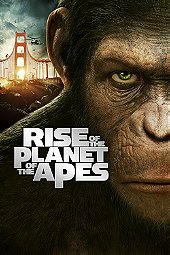 There's really not to much to say about this one, it's about what you'd expect it would be.

It's definitely fun to watch and delivers pretty much what you're looking for. And the apes look great. They did an excellent job making them humanistic as well as realistic.

My only complaint is that the majority of the film felt almost palpably rushed. I realize they had a lot of story to cram into a single film, but I would have gladly sat through a 2-hour picture to have it a bit more fleshed out and not have such bothersome pacing. It's not like they leave holes in the story — you can follow it okay — but there are plenty of times I felt myself thinking: "Okay, I see what you're saying here, but jeez. Slow it down a notch." Especially in the beginning, when it's all moving so fast that things that would usually be relayed quite subtly, instead become obvious information cues. A quick camera shot on the father's teaching award, and now we know he used to be a great piano teacher. Even the camera shot didn't seem to linger as long as it normally would in a different film.

It's possible this was at least partly done on purpose, to give an added feeling of uneasiness or anticipation, but I doubt it. This isn't the kind of film you necessarily need to feel rushed. Shooting something like Catch Me if You Can in 52 days makes sense. I think in this case it was either time constraints, budget constraints, rookie direction, or any combination of those and other things.

I was also kind of surprised the Frida Pinto role wasn't bigger, but then again, there wasn't much of any character development. (There wasn't time for it, apparently).

Still, the pacing does slow down a bit as the film progresses and is a good cinematic experience. Fun, and leaves you wishing the next one was available to watch already. I'd give it a 7.5, but for this whole-number rating system, I suppose that has to get rounded up.