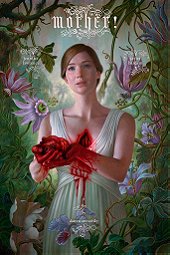 Darren Aronofsky drops an atomic bomb on the cinematic landscape, bringing passion and artistic vision to the box office where those qualities are in short supply. Mother! might be the most well crafted, intense and creative dissection of religious mythology ever made. It starts out as a slow burn mystery, feeling almost like a dream, but soon plunges forth into nightmare territory. It takes all the assumptions and contradictions of Christian dogma, contrasts them with the reality of our relationship to the Earth, and splatters them across the canvas in all their hideous cruelty.

This is not a film for people who like to have their hands held by simplistic plots, lots of exposition and a paint-by-numbers procession of events. That doesn't mean you need to be a genius to understand its ideas, but it does mean you're going to have to think and some knowledge of the Bible is handy in deciphering its threads. Most of the negative reviews I've read for Mother! were from people who made no attempt to understand it, claimed it's "pretentious" with no supporting argument, or they understood the film on some level but simply didn't like its message. By even engendering this strong of an emotional reaction, Darren Aronofsky has emerged victorious and demonstrated that his work is culturally relevant.

On top of its achievements in the realm of story and ideas, Mother! is also a visual and audio marvel, creating an atmosphere of utter claustrophobia that's as crushing to the audience as it is to the female lead. The tight camera angles and spiking soundtrack ramp up the tension as the movie proceeds from general unease to outright panic. This was a film that was designed to make its audience feel uncomfortable on multiple levels and it does so splendidly.

If you enjoyed Aronofsky's other head scratchers and psychological thrillers (Pi, Requiem For A Dream, The Fountain and Black Swan) you're going to love Mother! If you didn't like those films, chances are you won't like this one either. In the opinion of this reviewer, Darren Aronofsky has taken another step forward in an already impressive career, solidifying his place as one of the best directors of our time.