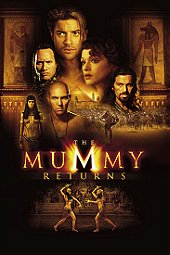 "Go to hell and take your friends with you!"


The seminal rule of sequels to a blockbuster declares that everything must be bigger: bigger special effects, more action, and grander locations. Sequels are the beloved of Hollywood studios who look forward to an easy box office hit. For audience, however, the prospect is often less attractive. Some films shouldn't have sequels. Every once in a while, though, sequels can be worthwhile. Looking at the Indiana Jones franchise, the sequels exist simply to place the central character in a different adventure. Such is also the case with The Mummy Returns.

The film is an excuse to reunite a majority of the original cast for another adventure. However, at times the film is a severe case of déjà vu and it's impossible to shake off the sense of "been there, done that". What made the Indiana Jones franchise so interesting is the originality with each new episode. When it comes to The Mummy Returns, Sommers is just too lazy to develop an entirely new adventure. It's obvious he wants to disguise this laziness as making clever, subtle references to the first film. But it makes things only more predictable.

There are also countless inconsistencies that plague the script. The characters featured in The Mummy charmed their way to our hearts by means of charming dialogue. Unfortunately, though, The Mummy Returns relies entirely on our willingness to follow the same characters. There's no room for them to grow...no solid character development...instead we're tossed right into a lacklustre display of rehashed set-pieces, humdrum visual effects, and an excess of action made up entirely of climaxes. At the end of the day, so many things are thrown at the viewer that it all ends up mattering quite little. Then, as if adding insult to injury, the immensely-hyped appearance of wrestling star The Rock is dreary beyond all conception. The Rock (a.k.a. Dwayne Johnson), playing The Scorpion King, appears only for a few minutes during the film's early moments, and he returns as a completely computer-generated entity during the finale. As a half-man and half-scorpion creature, The Rock looks like he's part of a Z-Grade video game. The CGI is truly awful.

Anyway, The Mummy Returns is set many years following the first film. Rick O'Connell (Fraser) and Evelyn (Weisz) are now very happily married with precocious young son Alex (Boath) to accompany them during their archaeological adventures. Rick and Evelyn investigate the legend of The Scorpion King who's said to exist in myth and legend. Apparently every few thousand years The Scorpion King will rise again with his army and will rule the world. His unbeatable army is available to him or whosoever can defeat him. At the beginning of the Egyptian New Year, rival archaeologists unearth and resurrect Imhotep (Vosloo). The resurrected Imhotep and his reincarnated love (Velasquez) plan to travel to the tomb of The Scorpion King to awaken him. Imhotep then plans to defeat The Scorpion King and gain control of his army. With this army he will rule the world. Naturally, only Rick O'Connell and his comrades have the ability to prevent the instigation of Imhotep's plan.

A central fault in the storyline is the extraordinarily conventional world domination sub-plot. It's incredibly clichéd and has no place in an adventure film such as this. The script also abuses the amount of convenience typically allowed for a blockbuster film. The character of Rick O'Connell is cemented too ridiculously into the back-story of the film. He's destined to become one of the religious warriors in the league of Oded Fehr's Ardeth Bey. Watching him battling mummies with an arsenal of weaponry is really cool, but it's cheap and contrived for him to suddenly become an integral part of the film's mythology. Evelyn also begins having visions and flashbacks of her past life. Apparently she's a reincarnation of the daughter of the Pharaoh from many thousands of years ago. Once again, this is too convenient and exists as an excuse for the ancient puzzles to be easily deciphered. Why did these flashbacks never occur during the events of the first film? It's just lame.

At times the film tends to insult the intelligence of its audience as well. The internal logic makes no sense whatsoever. Like how the hell do the Egyptians obtain Japanese daggers to use during battles? Said daggers aren't even Egyptian and weren't even in existence 3,000 years ago! Sommers also endeavours to make his characters so realistic and down-to-earth. They bleed, they show vulnerability and they generally get scared. Yet he bestows them with superhuman abilities. For instance, Rick is carrying his son while outrunning the rising sun. In order to run faster than the rising sun one must be capable of achieving speeds in excess of 1,000 miles an hour! It's one thing for someone powerful like Imhotep to accomplish this task, but it's entirely unbelievable for a mere mortal such as Rick to run that fast while the sun rises conveniently slowly.

Then there's the matter of impeccable timing. All the characters seem to accomplish things in the nick of time. Like the flying contraption that's repaired in time to rescue the characters before they'd be annihilated. Or when the central characters arrive just in time as the mummy resurrection ceremony is taking place. These coincidences are too perfect to be believable.
In addition, director Sommers has succumbed to the plague that's dominating the current action genre: slow motion during the action scenes. This means slo-mo fight moves, and even following a spear in mid-air in ultra slo-mo! It gets tiresome very quickly, not to mention it rapidly kills the film's realistic intentions. The Mummy films have never been Indiana Jones, but they've tried. With the inclusion of slow motion, it just becomes a muddled and tiring mess. To make matters worse, the special effects are bottom-of-the-barrel material. The Scorpion King looks like he's from a video game, his army look extremely unconvincing and the set extensions are painfully obvious. One of the film's highlights is an army of skeletal pigmy warriors. They're an interesting design, but the animation is just appalling.
The script must also be mentioned. The first film featured some fun witty dialogue. None of this wittiness is retained. Very few memorable lines are included. A few times you'll crack a smile, at other times you'll be rolling your eyes at the painful dialogue that references the predecessor or steals a few direct lines from the first film.

James Cameron went bigger and louder from The Terminator to Terminator 2: Judgment Day. He succeeded mightily. Unfortunately for Stephen Sommers, who wrote and directed The Mummy Returns, he does not succeed one bit. Everything is too overblown and overproduced. What was once a horror/adventure/action/comedy that was always grounded in at least a bit of realism has transformed into an adventure/action/comedy without horror elements that throws all credibility to the wind very quickly.
He also doesn't succeed because he digs into the same bag of tricks with little originality present. In The Mummy, Evelyn causes book cases to topple over like dominoes. In The Mummy Returns, her son causes a room of pillars to topple over like dominoes. In The Mummy Imhotep creates a sandstorm imprinted with his face to bring down an airplane. In The Mummy Returns, Imhotep creates a wall of water imprinted with his face to bring down a dirigible-like contraption. In The Mummy Jonathan asks Evelyn to help him decipher an Egyptian symbol while Evelyn is in the middle of a battle. In The Mummy Returns, Alex asks Jonathan to help him decipher the same Egyptian symbol while Jonathan is fighting. D'ya see where this is going?

As a standalone film, The Mummy Returns is an entertaining action/adventure flick. As a sequel, it's a feeble succession of poorly rendered CGI and campy rehashes. It's energetic enough to provide an easy night of entertainment, and believe me I enjoy watching this highly entertaining film, but it's far below the standard of its predecessor and the classic adventure films it tries to mirror. I'm aware that we go to the movies with a healthy suspension of disbelief, but The Mummy Returns takes it way too far. The original The Mummy provided an easy night of fun and entertainment and it never takes itself too seriously. This sequel is ridiculous and unbelievable, flaunting irritating camera work and scarce originality. Followed by The Mummy: Tomb of the Dragon Emperor. A spin-off also exists, entitled The Scorpion King.