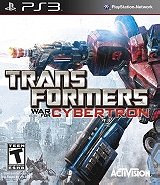 The heroic Autobots and tyrannical Decepticons wage war for control of the planet Cybertron.

I was interested to see this game's take on the events leading up to the Transformers' escape from Cybertron ā a part of the story I hadn't seen explored before. The game is divided into two campaigns, with the Decepticons' story taking place in the first five chapters and the Autobots' story in the second five. You have the option to play either one; I chose to play the story chronologically. Both sides offer some highly enjoyable story-based moments. We find out what Starscream started out as and why Megatron keeps him around, and we get to see Optimus become the new Prime and see the makings of the hero we all know and love.

You choose from one of three characters to play each mission. At first, I'd usually choose the one I was unfamiliar withā¦ and then end up forgetting that character's name! :)

The gameplay itself severely dampened things for me, though. I'm just not a fan of shooters, and this game was no exception. At least ninety percent of the time, you're just running around and shooting enemies ā there's very little variety ā which made for an exceedingly monotonous experience. The most fun I had was during the boss fights at the end of each campaign, because at least they involved some strategy.

Thus, I'd be more inclined to watch this game in future rather than play it.