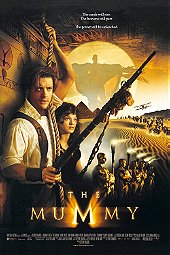 "Death is only the beginning."


In tradition with archetypal action/adventure blockbusters such as Romancing the Stone and the marvellous Indiana Jones series, The Mummy is a substantially entertaining and enjoyable tribute to the endearing classic B-movie serials of the 1950s. The film is fundamentally an updated version of the vintage 1932 horror film of the same name that featured Boris Karloff as the central bandaged antagonist. Universal Studios commissioned the new 1999 version as a loose remake in an attempt to create an Indiana Jones-like franchise. Considering the unbelievable lucrative financial success of the Indiana Jones adventures (featuring an ideal Harrison Ford as the title's namesake), a similar series could potentially generate analogous success. With that in mind, Stephen Sommers' action/adventure blockbuster The Mummy commenced development. It's a hokey, jokey, ludicrously over-the-top and stupid action film, but it's one that certainly serves its purpose of entertaining its target audience.

In a nutshell, the film is a special effects extravaganza that's adequately appealing and clever to guarantee enjoyment for repeated viewings. This film was among my favourite movies as a youngster. I subsequently watched the film so often that every scene was committed to memory. Years later it presents itself not as an Oscar-worthy masterpiece, but an action/adventure film that's just so much damn fun to watch!
Celebrated critic Roger Ebert stated in his review that "There is hardly a thing I can say in its favor, except that I was cheered by nearly every minute of it." Ebert's sentiments essentially suggest that the film's only redeeming feature is its entertainment value. This opinion is widely shared by many, myself included. It's big, dumb, loud and riddled with clichés - and proud of it!

The story tracks keen explorer Rick O'Connell (Fraser) in the early 20th century. He's an American commander who foolishly lead his garrison into Egypt in search of Hamunaptra: more commonly known as "The City of the Dead". However, before Rick is capable of completing his quest he's captured with the outlook of execution in his future. Curious nerdy librarian Evelyn (Weisz) and her brother Jonathan (Hannah) come into possession of one of the artefacts that Rick discovered. Said artefact presents itself as a key of sorts containing a map detailing the location of Hamunaptra. Enthusiastic to travel to the city, Evelyn rescue Rick from the noose at the last second. The trio travel to Egypt with the location of Hamunaptra in mind. A group of egocentric American explorers are also en route to the city with the prospect of treasure and money on their minds. Trouble soon imparts itself when Evelyn inadvertently disturbs the tomb of a 3,000-year-old mummy who suffered an unspeakable curse. This resurrected mummy was once known as Imhotep (Vosloo), and he was entombed due to crimes of passion. Imhotep awakens from his mummified state to wreak havoc on the world...bringing with him the ten plagues of Egypt. Now it's up to Rick and his companions to end the curse and send Imhotep back to his grave.

From the first frame 'til the last, The Mummy is intrinsically good entertainment. There's a high amount of energy, an abundance of action scenes, a charming cast and meticulously-crafted sets. However, the film is extremely flawed. For starters, at times it begs its audience to suspend their disbelief too severely. Like the impeccable timing of events, perfect weapon accuracy of the heroes and of course the copious plot holes that don't make a lick of sense (such as Evelyn's character being so poorly written. She's so clumsy in her first scene, and then mysteriously never again is this clumsiness displayed again). This is a summer blockbuster after all, so I guess these flaws are a given.
However, I must digress...there are special effects galore but what's missing is the sense of awe or marvel. Looking back at the days of Indiana Jones the artefacts are amazing and just their screen presence shines like a new coin. Despite the artefacts being well designed here, they are wholly forgettable and aren't exactly mind-blowing. The filmmakers are under the false impression that lots of gold creates staggering images. Unfortunately it doesn't work as well as they want.

The Mummy can't make up its mind about its genre either. It's an action and adventure film for sure, but director Sommers tries his hand at horror. The horror, however, is so poorly orchestrated. Corpses look like fake dolls, the creature's roar isn't spine-chilling and the atmosphere is seldom tense. The special effects may have been cutting edge for their time, but they haven't aged well. At times the CGI looks like an old video game. The tension is therefore alleviated and we are unable to believe what's occurring. Unfortunately, as well, there is a lack of genuine danger. The characters are played out for laughs. Like the fat warden who feeds off stereotypes, for example. At the end of the day, as well, it just goes on forever. The script tries to fit far too many things into the film. Consequently the film feels so irritatingly overcrowded.

Brendan Fraser is no Harrison Ford, but as an adventure hero he's pretty decent. He's an exceedingly likeable hero and he's fun to watch. His one-liners are delivered competently. Fraser can frequently make his audience laugh. This is his greatest quality but also his greatest flaw: frequently smirking with very little depth. The lack of danger is emphasised by Fraser's constant jokes.
Rachel Weisz is a convincing nerd-ish librarian who finds satisfaction in exciting treasure-hunting. Fraser and Weisz have great chemistry together. Despite the characters being so incompetently written, the primary two actors elevate the material to satisfying proportions.
Scottish actor John Hannah is probably the stand-out performer here. He's witty, funny and charming throughout.
Arnold Vosloo is given the extremely difficult job of spending most of his scenes in a motion capture suit. Very rarely does Vosloo appear without CGI distorting his image. In some of his earlier films such as Hard Target, Vosloo has been quite wooden. He's not too bad here, although he lacks any degree of intimidation or authority in looks or voice. The rest of the cast are at a usual standard.
It's worth noting that the significant characters are treated with much sentimentality. We have the heroes who get the blunt end of the stick most of the time, the annoying supporting characters that will obviously die, and then of course the insignificant extras provided merely to get knocked off in different ways. In other words, most of the characters are severely clichéd.

After listing the abundance of flaws, there are a number of positives to be pointed out. The action is exuberant, the film moves at a feverish pace and the frame is brimming with authenticity. Costumes, props, locations, etc, create a fairly authentic atmosphere. Jerry Goldsmith's music provides an additional edge as well. For the action it's fairly pulse-pounding and at other times it's foreboding.
All in all, I always have a jolly good time watching The Mummy. It's severely flawed, but it's a summer blockbuster so this is almost customary. It is a daft, albeit grand high-flying action/adventure romp. It must be said that I admire this flick for accomplishing what Hollywood ought to be doing with every release - entertaining audiences to no end. This is precisely the kind of film you bring to mind when you fancy cranking up the volume to give your speakers a work-out, microwaving a bowl of popcorn and relaxing effortlessly to waste a rainy Saturday evening at home. Straightforwardly put, it is just damn good fun. Followed by The Mummy Returns.