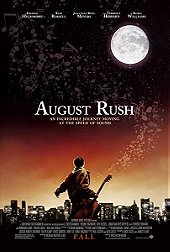 "But I believe in music... The way that some people believe in fairy tales."

August Rush is a good movie. I can watch it over and over 'cause I will never be tired of him. In my opinion this is a movie that call our attention from the beginning until then end.

I think the cast was perfect. Freddie Highmore is a good actor when we talk about these kinds of movies and, in my opinion, Robbie William is perfect for this role, I think he's got some kind of magic for acting. The cast was really perfect and I can't imagine others to play the same roles.

Soundtrack is fundamental for any movie and I believe that with the certain one a movie can be really good. That's what happen in August Rush, the soundtrack of this movie makes it magic. There's a Concert of music in the end and i really love to hear that, it's my favorite part of the movie.

The CGI Effects might not be very detailed but in the beginning when the boy was on that wheat field and he was like control them it was really great.

The story is about a talented singer and a charismatic cellist that fall in love and spent a night together. Lyla, the cellist, is pregnant but her father thinks that the baby will ruin her future and he gives him to adoption.
Years later the boy runs away from the orphanage to find he's parents.