The force is with you but you are not a Jedi yet.. 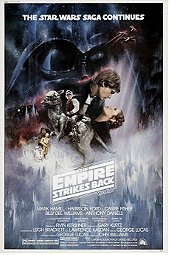 ''The force is with you, young Skywalker, but you are not a Jedi yet.''

While Luke takes advanced Jedi training from Yoda, his friends are relentlessly pursued by Darth Vader as part of his plan to capture Luke.

After the success regarding the original Star Wars now titled A New Hope, one would have assumed a regression in quality thanks to the whip lash that George Lucas appears to have in making films.
Thankfully veteran Director Irvin Kershner expertly assists by directing and gracing George's storytelling with skilful poise regarding film making. Mix this with screenplay that sizzles and succeeds from Leigh Brackett and
Lawrence Kasdan, and you have a sequel victory assured.

The Empire Strikes Back brings back the incredible original heroes, coats them and grants them depth and story, still finding time to bring in new timeless characters that become legends in their own assurity.
With the new director leading proceedings, Irvin Kershner, brings even more life and vitality to the story and the world that made the first Star Wars so incredible.
The only problem really with the first Star Wars is it felt like only a beginning, in the regard that it was, and also a film which could stand alone but audiences are left wanting more. Like there were layers of detail that we didn't get and The Empire Strikes Back burst into those layers and put us deep into the world and the story never to turn back. On top of that the film delivers the first and most infamous twist in film history...family connections so to speak. I won't give it away if you have existed under a rock for the last three decades. The fights are epic, the new characters are amazing, and even Hamill as Skywalker starts to really shine and receive some real depth to his character.

Mark Hamill's performance matures and really comes full circle in relation to Luke Skywalker, whom he embodies this time round. His naivety and boyish charm changes for the better as he trains to become a Jedi and an adult.
Harrison Ford's Han Solo is probably the character that changes the least and probably just a case of "don't change a good thing." Solo is still a kick arse hero and his story is a focal point for the sequel.
Carrie Fisher slips back into her role as the feisty Princess flawlessly. This time the banter and romantic tension between Fisher and Ford heats up and really gives the story a timeless romance. Anthony Daniels, Kenny Baker, and Peter Mayhew return in full form as C3P0, R2D2 and Chewbacca and they are better than ever. David Prowse with James Earl Jones providing the voice continues to make Darth Vader the most evil, intensely bad villain in the history of films. Vader's character really turns up the heat and gives a terrifying turn as the leader of the Empire. Billy Dee Williams is a newcomer to the cast and a welcome addition. He plays gambler, scoundrel Lando Calrissian. He doesn't get a lot of background or depth to his character and yet he is a great addition to the cast. And saving the best for last...the master of the Star Wars Universe. Frank Oz brings Master Yoda to life. The entire sequence with Luke and Yoda meeting for the first time and training is brilliant. Yoda is a timeless character, a pop culture idol and yet his part in this is touching, funny, and brilliant. This is one character whom becomes much more than merely a puppet, he becomes a being we can relate to and listen to.

The Empire Strikes Back is simply the adventurous and funniest sci-fi sequels to grace us ever. The film picks up where the first left off and takes the viewer on a thrill roller-coaster ride that never slows down. This is ultimately all about the evil Empire and Vader getting his revenge, essentially succeeding. Starting from the opening moment, the brilliantly crafted ice world called Hoth, and continuing on to a show down between Skywalker and Vader himself and the revealing of the infamous secret, this film is pure brilliance. The direction, the creation, the writing, the characters and the special effects are jaw droppingly amazing. There is simply no way you can watch just one Star Wars movie because the story is so important but after watching the first one and thinking... this is fun and additively entrancing, The Empire Strikes Back will take it up a notch, up into the heavenly stars and realms of a perfect film.
Simply among the greatest sequels of all time.

''Life creates it, makes it grow. Its energy surrounds us and binds us. Luminous beings are we, not this crude matter. You must feel the Force around you; here, between you, me, the tree, the rock, everywhere, yes. Even between the land and the ship.''

Marienbad: The Elusive Elegance of Delphine Seyrig by Kenji