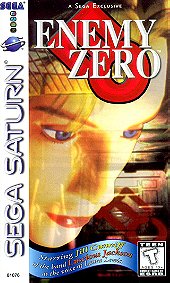 Enemy Zero, developed by WARP in 1996, is a science fiction survival horror game for the Sega Saturn. You will notice, undoubtedly, that it was heavily influenced by one particular horror movie. You are Laura Lewis, a shellshocked space traveler waking from cryogenic sleep because of an emergency. Your memory is fuzzy, perhaps because of the sudden jolt from deep sleep. You only know that something horrible has happened, and an organism is now loose on the ship. The game begins on Disc 0 as you watch (on video phone) this alien organism kill the ship's engineer, Parker.

Your ship, The Aki, has seven crew members, including David, the ship's co-captain and your love interest. Your mission is to reestablish communication with the rest of the crew before the invisible monster does.

And that's exactly where Enemy Zero excels. The alien on board, called Enemy Zero (or E0), is invisible. You cannot see it. You only hear it when it is right on you. And one touch from it will kill you. Your only salvation is the VPS, a sort of hot-warm-cold detection system of beeps that serves as your early warning system. The frequency of these beeps increases the closer the enemy approaches, louder and faster. Still you won't see anything. Your best bet is to either wait for the enemy to make its attacking sound (which is your cue to fire your gun) or turn and run the other way (assuming there isn't another alien in that direction, too). As you can imagine, this fills Enemy Zero with an intensity most horror games only dream of.

In addition to the above first-person combat mode, there is a point-and-click room mode. This mode is exactly like D, WARP's earlier game. The environments are extremely detailed, and you move Laura slowly between click points. The rooms are free of monsters, so this part of the game is strictly for puzzles and cutscenes. And the game again excels in this department. Plenty of scenes, dialog and challenging puzzles. Further, Enemy Zero is extremely detailed and easily the best looking of WARP's D series (D, Enemy Zero, and D2). Simply, it is immaculate, graphically far superior to any PlayStation or Saturn game I have ever seen. This is probably in no small part due to Fumito Ueda, the lead animator. Who is Fumito Ueda? You probably know of him, even if you don't know his name. He's the mastermind behind Ico and Shadow of the Colossus. Those are his babies, and the finesse of his animation really shows in Enemy Zero.

The music for this game was composed by Michael Nyman, who wrote the soundtrack for The Piano. There are deep, ambient tones during the detailed room mode, which really adds to the tenseness of your more mundane tasks. There are gentle piano pieces for the cutscenes, just perfect for the dialog (which is pretty decently acted, too). The music really flows with the game, and never tries to outshine it or clash with it, which is something horror games in general suffer from.

I would say that Enemy Zero is a perfect horror game except for one thing. It is fucking hard. It is so fucking hard. You are given a limited number of saves and loads in the game. So you cannot simply restart from the last savepoint to retry something. You are literally penalized for loading your save files, and you can get to a point where your voice recorder (save/load item) no longer has enough battery power to load your record. That means you lose your save file. That's right. All your progress gone. That is pretty unforgiving. The aliens are unforgiving. Every map, though detailed and beautiful, is a fucking labyrinth. The guns are weak to useless. And the game's difficulty actually mounts toward the end, so that once you beat an exhausting part and think you're close to the end, you actually have three or four more tasks, each harder than the previous. Enemy Zero is almost the most perfect horror game I've ever played, but it is obnoxiously hard. And I played it on NORMAL.


Winning Quote of the Game:

Kim: When it comes to taking on the enemy in combat, I know what to do. Tell me, do you know what the most crucial thing is? It's to stare your enemy in the eyes and never, EVER look away, just like taking care of a baby. That's right.