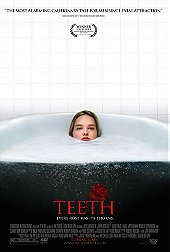 "The toothed vagina appears in the mythology of many and diverse cultures all over the world. In these myths, the story is always the same. The hero must do battle with the woman. The toothed creature can break her power."


Teeth is a contemporary low-budget horror movie featuring an unusual twist. Where Hostel, Saw and several other modern horror movies flaunt murders attributed to twisted serial killers, director Mitchell Lichtenstein manages to avoid the genre stereotypes, offering something different and innovative. On the surface it appears to be a horror film based on an ancient legend of the 'Vagina Dentata', but it's also a coming-of-age story and an insightful social commentary on contemporary perspectives of sex. Teeth has been much discussed since its premiere at the Sundance, gaining much notoriety. Since its initial premiere, the film has gathered a few loyal fans as well as the inevitable number of haters. By no means is this a terrible film...however in no way is this a horror masterpiece. Despite the elevated originality, it's hard to overlook the thin plot and the film's frequent descent into stupidity and silliness.

Dawn (Weixler) is an attractive high school virgin and a devoted component of her local chastity club. Similar to most modern teenage girls, Dawn strictly adheres to a vow of abstinence - i.e. she will remain a virgin until marriage. Dawn finds it difficult to remain focused on her vow with stepbrother Brad's (Hensley) inappropriate behaviour, not to mention the fact that Brad has sexual desires for Dawn. Little does Dawn realise that she's a living representation of the 'Vagina Dentata' - this literally means that she possesses a set of sharp, dangerous mutant teeth in her vagina. After her supposedly likeminded boyfriend forces himself upon her...the vagina begins chomping and her boyfriend's death is the outcome. This is just the beginning as this powerful tale of female empowerment only grows increasingly twisted and disturbing.

Teeth was marketed as a horror/comedy hybrid. The film could only work as a cross between horror and comedy, simply because no-one will ever take the concept seriously. And as a comedy...the horror scenes are too ghastly and difficult to stomach for someone searching for a straightforward comedy.

Director Mitchell Lichtenstein proves competent behind the camera with a limited budget. He is aware of how preposterous the concept is, so he inserts some subtle dark humour. Many of the "chomping" scenes are hilarious beyond all belief. Just the noise of a set of teeth between Dawn's legs... munching on a man's joy department...it will have you in fits of laughter. I must give kudos to Lichtenstein for not following the B-Grade horror path. If it was totally B-Grade, and he was proud of it, we probably would have seen a giant vagina monster with teeth...salivating and laughing in sinister ways. Who knows how cool that could have been, or how much of a travesty it could have been.

Considering the low-budget origins, the acting on offer isn't too bad. It's Jess Weixler's show as she's the one with the mutant vagina. Jess is well-nuanced as she conveys necessary humour, ambivalence and self-doubt in her portrayal. John Hensley isn't too bad as Dawn's brother from hell. On the other hand, acting from some of the other cast members is quite atrocious. The gynaecologist in particular sounds contrived and unrealistic. Not to mention a few school children extras who look as if they've just endured a monotonous multiple-day lecture on politics. For your typical low-budget Sundance feature, the sub-par acting is generally to be expected.

Teeth has a few jolts, jumps and unpredictable twists up its sleeve. It's a grave disservice to the filmmakers to dismiss the film based solely on its premise. If you're one of those people, then the movie probably isn't for you anyway. At no point is it difficult to believe the premise due to the realistic prosthetic effects and the haunting noises. For an indie feature, the acting is standard but the director should be proud of his efforts. It sometimes follows the horror template while also being a potent commentary on abstinence and the growing restrictions. The film is marred overwhelmingly by its temptation to become very silly and stupid, sometimes preposterous, as well as unconvincing acting playing its part.