Pushes the boundaries of what Star Wars can be 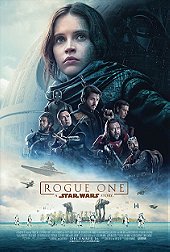 "The world is coming undone. Imperial flags reign across the galaxy."

A lot was riding on 2015's Star Wars: The Force Awakens since it restarted the live-action Star Wars saga, which is now controlled by the Walt Disney Corporation. But 2016's Rogue One: A Star Wars Story is equally important, as it kicks off Disney's master plan for endless Star Wars spinoffs which focus on more minor side stories. It's not the first franchise detour (the animated Clone Wars movie landed in 2008, and there were Ewok telemovies in the 1980s), but it is the most significant, enjoying an enormous scope and bolstered by first-rate technical specs. This is a wholly different Star Wars, retaining the same sights, sounds and general iconography of the universe but achieving a much grittier tone than ever before. Rogue One is an out-and-out war movie, and thankfully the approach pays off, though pacing issues do emerge as a result of the overly intricate story. 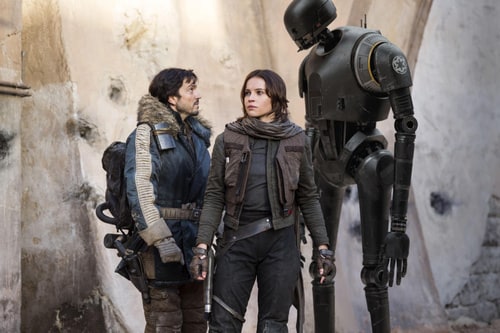 An Imperial scientist, Galen Erso (Mads Mikkelsen), tries to escape the clutches of the Empire by living a peaceful farming life, but Director Krennic (Ben Mendelsohn) eventually catches up to him, demanding that he return to work. Although Krennic takes Galen hostage and kills his wife, Galen's daughter Jyn (Felicity Jones) manages to avoid capture, and is adopted by rogue extremist Saw Gerrera (Forest Whitaker). Growing up, Jyn hides her true identity from the Empire as she spends time in Imperial captivity until she's broken free by Rebellion spies, led by Cassian Andor (Diego Luna), who intend to track down Galen. Jyn's father was instrumental in designing the Galactic Empire's new heavily-armed space station, the Death Star, and may hold the key to its destruction. Learning that the Death Star plans are stored at an Imperial outpost, Jyn and Cassian are joined by a rogue squadron of Rebels for their risky mission to steal the schematics, including android K-2SO (Alan Tudyk), Imperial defector Bodhi (Riz Ahmed), blind monk Chirrut Imwe (Donnie Yen), and warrior Baze Malbus (Wen Jiang).

Instead of an opening crawl in the tradition of the series, Rogue One begins with a taut prologue which sets up the story more effectively than a block of text ever could. Co-written by Chris Weitz (2015's Cinderella) and Tony Gilroy (Michael Clayton), this is a talky picture, running at over two hours and packing more than its fair share of exposition. Although director Gareth Edwards (2014's Godzilla) is able to maintain interest for the most part, the movie does hit its sluggish patches, lacking a thrilling sense of escalation. Put simply, the narrative should be brisker, as it's bogged down by subplots that don't seem necessary in the grand scheme of things. However, what's particularly laudable about Rogue One is the fact that this is a story about the minor cogs in the machine, as opposed to the big heroes who normally take centre stage in the Star Wars saga. Furthermore, Edwards touches upon the less glamorous aspects of the Rebel Alliance, as many of the soldiers are haunted by things they've done in the service of the Rebellion. This is one of several refreshing angles that Edwards manages to explore. Added to this, Rogue One perfectly ties into A New Hope, providing welcome new context for the events of the 1977 movie's iconic opening sequence. Fans can argue about the necessity of telling this story, but the deepening of the Star Wars mythology is fascinating nevertheless, making this feel like Episode III½. 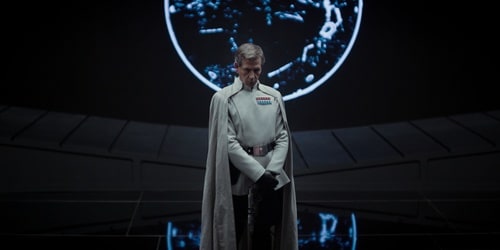 Much like Edwards' Godzilla, there is a lot of build-up here, but it all pays off for an awe-inspiring finale that seriously delivers. Changing up the standard Star Wars backdrop to incorporate a tropical beach setting, the third act skirmish on the planet Scarif is gargantuan, involving shootouts as well as aerial combat, with loads of Stormtroopers, TIE Fighters and AT-ATs threatening the band of Rebels. The war scenes in the final act are far removed from what we've come to expect from a Star Wars movie (which is ironic, considering that "Wars" is in the title). Edwards draws upon Saving Private Ryan and a bit of Apocalypse Now to stage the hard-hitting battle scenes, which may be too brutal for young children. The outcome of the mission may be a foregone conclusion, but the specifics are not, and that's precisely why the climax is so engaging. The well-publicised reshoots did provoke concerns that Disney might dilute the movie, but the seams are never visible - Rogue One doesn't feel like a compromised vision. Instead, it's astonishingly cohesive throughout, sticking with a notably bleak tone all the way through to its powerful ending. It's certainly not as "safe" as some had feared.

As to be expected, Disney spared no expense bringing Rogue One to life, with the film carrying a rumoured $200 million price tag. The special effects are predictably impressive, and it helps that Edwards shoots for a heightened sense of immediacy. Commendably, Rogue One eschews the regular Star Wars aesthetics - it doesn't feature the standard transitions or an opening crawl, and it only makes infrequent use of recognisable soundtrack beats. Cinematography is darker than before, and it's mostly handheld, though this is not to the detriment of the movie since you can always comprehend what's happening during the action sequences. Furthermore, there is an impressive sense of tangibility to the fighter ships and Star Destroyers - it looks as if practical models were used as opposed to outright CGI, creating a more convincing illusion than digital effects ever could. However, the production does lack something in the way of visual panache, which comes from the decision to shoot the picture digitally, making it look less majestic than the celluloid photography of The Force Awakens. Interestingly, rumour has it that the original score was rejected for being too far removed from John Williams' iconic compositions, and composer Michael Giacchino had mere weeks to compose a new soundtrack. To his credit, the music is quite good on the whole, effectively accentuating the experience.

There is fan service throughout, with the movie even giving us a glimpse of Darth Vader (voiced by James Earl Jones) on-screen for the first time since 1983's Return of the Jedi, leading to arguably the movie's best scene. Unused pilot footage from the Death Star assault in A New Hope is even employed, while the frame is often packed with recognisable droids hiding in the background that you may not notice on first viewing. However, less successful is the use of shonky digital effects to resurrect one deceased actor and de-age another. The intentions are noble, but often the result looks like something from a Pixar movie, instantly taking you out of the movie. It's 2016, surely they can do better than this.

Unfortunately, Rogue One falls short in terms of characterisation, as there's not enough depth or humanity to the ensemble. Jones manages to impress despite her one-dimensional role which feels like a plot device, but Luna is less successful as Cassian; he's one of the most disposable heroes in recent memory. Faring far better is Krennic, an inspired creation played to perfection by Australian actor Mendelsohn. Krennic is far more engaging than the typical villain, and he's actually given more dimension than the heroes of the story. Mendelsohn undoubtedly delivers the finest performance in the film, surpassing his co-stars with ease. With that said, though, Tudyk is an utter scene-stealer playing the droid K-2SO through motion-capture. A reprogrammed Imperial droid who speaks his mind, K-2SO is a constant source of amusement, delivering an armada of one-liners and a string of uproarious comments. Droids are a staple of the Star Wars universe, making it all the more exciting that this new creation is arguably the saga's finest to date. Meanwhile, Whitaker almost suffocates the movie with his ludicrous overacting, though Yen manages to carve out a memorable character despite his limited screen-time.

Flaws notwithstanding, Rogue One pushes the boundaries of what a Star Wars film can be, and that's seriously exciting for a long-running franchise like this. (The subtitle A Star Wars Story is actually absent from the film proper.) It succeeds in trying something different, never falling victim to the bland writing or poor direction which ultimately sunk the prequel trilogy. Due to its unique aesthetic and narrative approach, Rogue One is certainly more intriguing than The Force Awakens, but it's not necessarily better - J.J. Abrams' film was zippier and featured better, more fleshed-out characters. The bleakness of this first spinoff does mean that its replay value might be less than the norm for Star Wars, but that's precisely why it lingers in one's memory after it's all over. It also makes for a perfect companion piece to A New Hope. There are fears that Disney is going to run Star Wars into the ground, but if all future movies are on the same level as Rogue One or The Force Awakens, the House of Mouse can keep them coming.