Review of Be Here Now 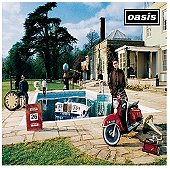 It's the most anticipated album in the history of British discography. The numbers say: the first day of its publication, August 21, 1997, well 424,000 people went into a record store to buy "Be here now" by Oasis. "25" by Adele he did not go anywhere near. If the Beatles were "bigger than Jesus," according to the unfortunate definition of John Lennon in 1997, the band of the Gallagher brothers was "greater than God", as he said with extreme modesty Noel. But "Be here now" is the disc in which the splendid band mechanism misfires. The s'irrobustiscono arrangements and s'appesantisce step. Vanish the fabulous naturalness and lightness of the successes of the first two albums "Definitely maybe" and "(What's the Story) Morning Glory?", Replaced by a layered sound and rattling from war machine that lives on today in the deluxe that distributes 3 compact disc the original remastered, rarities and demos. It is also a "drug records", designed and produced in a turbulent period in the life of the Gallagher brothers. "The strategy of our management team," said Noel, "was to work the band at all costs. If he did not, it would fall to pieces. "
Oasis live in hyperspace, in those years, and in fact the album's story began with a holiday in Mustique, a private island in the Lesser Antilles, the goal of exhausting stays of millionaires looking for posh landscapes, from David Bowie to Nick Mason Pink Floyd, and today as well HRH Kate Middleton. There, in the villa of Mick Jagger, in early 1996 Noel Gallagher tried to force the writer's block he suffered a series of hacking demo with co-producer Owen Morris. Contained in the third CD of this new edition, the Mustique specimens relative to the pieces of the album and b-sides are the highlight of the reprint, at least from the point of view of the rarity of the same, and allow us to peek if not birth, at least the first steps taken by the songs. However, this is demo: finished better than others that are heard in deluxe editions, actual performance-driving, but they are still specimens with all the instruments played by Noel except in "Fade in-out" where the slide guitar c 'it is another celebrity who was enjoying the Mustique with Kate Moss, actor Johnny Depp. There is also a small yellow: "Trip inside (Be here now)" in the American version, at least that of iTunes, is a demo of the title track, an instrumental and European sides of least account.
The second disc contains the b-side (not all, however: there is for example the cover of "Heroes") and curiosities related to the album including a new mix of the single "D'you know what I mean" done by Noel Gallagher. "As the years passed," the guitarist says, "I started to realize that the songs of 'Be here now' were too long ... too long! Someone (I forget who) had the idea to recast the whole album for posterity. We just finished the first song, then we did not give anything and we dropped. " Among the debut of "My big mouth" at Knebworth and a piece like "Flashbax" that an attack on the Counting Crows (really), the second CD of the album provides confirmation on the nature and quality of the sides B era type " Stay young "or" Going nowhere ", but no real surprise. And the version of "Help" by the Beatles, where Noel playing at home, is not memorable. Among the curiosities, a "Setting Sun" by The Chemical Brothers for voice and guitar version recorded in July 1997 at Radio Deejay. If nothing else, in "The Hunger" is no exact definition of fame and debauchery, for those exact circumstances it means: "Do you laugh while you're sitting there you will drink champagne, and the others laugh at your despair while snort cocaine. "