Review of Stay Together 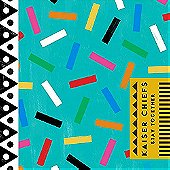 Gone the great exploits, something still continues to move among indie rockersd'Inghilterra. Among the stars of the golden age, the Kaiser Chiefs, after the case of "Ruby", continued their adventure, but never repeat the success of 2007 and, indeed, indulging in a couple of slips. In fact the Leeds quintet was holed up readily in its natural groove, namely that of "Brit pop / rock pleasant" cradle of so many British bands by individual splits charts and mixed results. With the latest "Stay Together", the most combative mood was closed and double-locked elsewhere to make way for a more festive sound and up to date.

Evidently something of the experience as a vocal coach for "The Voice UK" to discover young singing levers must have influenced Ricky Wilson to veer towards more alluring sound, projecting his team in a very different light. An evolution in some natural way after the abandonment of the drummer and main songwriter, Nick Hodgson, but in hindsight has not yet found its right square. In fact from a formation that bears the name of a football team (the Kaizer Chiefs Football Club of Johannesburg, for the record) is easier to expect agreements on power chords so much beer in tow, instead of keyboards and electronic instruments on which to rack , activities that the Kaiser Chiefs succeeds only in part. The single "Parachute" - defined by the authors as their second love song ever written in addition to the most famous piece of the repertoire - was a clear sign that something was changing in KC home and confirmation came the next "Hole in my soul ", crackling and healthy carriers tracks of a renewal that you would expect from a band that through thick and thin has more than ten years of activities in the curriculum.

The colorful pop tones is accompanied by a whole new maturity of the quintet that, putting aside their best Anglo-Saxon vein, focuses on human relationships with pleasure-seeking spirit, complicated and unique as essential. "Stay together" does not fail to point his attention to personal dynamics on the ordinary clinical eye, the joys and the sorrows of married life, and a gracious invitation to monogamy - sacrosanct choice but little inclined to make an album by revelers tones. Passed the most of the previous "Education policy stage, education, education & war" now the focus has shifted on the subject of relationships, the difficulty to remain united, and overcome - together - the daily difficulties. A concept that is a bit 'to blows with the current British situation, given the stagnant feelings of disappointment and uncertainty for the future, now that the UK has turned its back to the Union and that, probably, would have merited some reflection most convincing seen their commitment over time by Kaiser Chiefs as direct observers of their eccentricities of islanders (and blocks) in Europe.

Unfortunately, the atmosphere of joyful lightness and production of Brian Higgins (already working with the Pet Shop Boys and Sugababes) does not make this new course a safe bet. In the long run the breakthrough adult-dance by retro tones betrays a certain artificiality of the bottom, weighed down by a string of rather anonymous songs which dampens the attractive touch of those who save the cabin. Not just experimenting with falsetto, samples and straight cash to stay davveroinsieme, especially if it requires more attention when resurface the strong roots of the sound that has made them known to the world ( "Good clean fun"). So, as always, there is still much to do to get up there where they dare Coldplay.