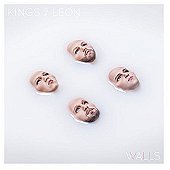 "Collapses, the walls," reads the teaser of the new album by Kings Of Leon, the seventh in their history. That exaggeration. Here there is no wall that falls, no revolution. "WALLS" is the album of a group of good conservatives, but actually there is a novelty: the band of the Followill hath been challenged to do things differently, uscendosene with his weirdest and gloomy job. After entrusted for years with Angelo Petraglia and Jacquire King, came out of his comfort zone and recorded in California with Markus Dravs, producer of Arcade Fire, also known to have got their hands on Coldplay discs, Mumford & Sons, the 'last Florence + the Machine. But "WALLS" is definitely less disturbing than it suggests the cover that reminds those of "Is there anybody out there" by Pink Floyd and "Byrdmaniax" the Byrds, with the four faces of the musicians represented by wax reproductions great little more than an inch and immersed in a milky liquid. In short, this is not the "Reflektor" by Kings Of Leon, but even "Mechanical Bull", which, it was said here, photographed them "happily conventional and relaxed in their own comfort zone."

With a career to revive - according to Billboard, in the US the last three albums have sold 2.5 million in chronological order, 776,000 and 347,000 copies - the Kings Of Leon say they have put behind the excesses of the past, stuff midway between "the dirt" and "Spinal Tap", and have re-established good relations between them after reaching the breaking point. The result is a mainstream disc without eccentricities and even embarrassing winks, maybe a little bold, but well-written, absolutely solid, which gives the public what the public wants and while advancing a modest assumptions of renewal. It is less rock'n'roll and definitely more cool than the last, it is not stuff to listen with a supply of beer cans. Begins conventionally with rock from the "Waste stage moment". S'ascoltano then guitar finishes that do not stonerebbero in a new wave disco, things lapping territories U2 ballads and impressive as that piano that gives title to the work, and it ends happily. But there are, also, small oddities for the group as Latinized "Muchacho" and the funk-rock "Around the world" that brings the quartet to the territories of Franz Ferdinand (or Talking Heads, if you want a more noble reference).

Become a symbol of the rock under 40 who still goes back to classical models, the Kings Of Leon "WALLS" remain after all faithful to this narrative. Piazzano rockettoni epic and slightly bohemian enough to satisfy those who would like them equal to themselves, but they take little freedom-effected guitars, some slight mechanical rhythm, an old synth, echoes and reverberations. The singer Caleb Followill says the happy period which is going through and in the texts, however, provides a nice sample of anxieties. Even "Muchacho", leggerina song at first listen it is hard to take seriously, about a co-worker and friend, "my favorite", died of cancer. There is the story of a waitress who travels from Texas to Hollywood with many dreams for the head, or "Waste A Moment". It is the true story of the wife of the singer who wants to move to California, and then change your mind. It's called "Conversation Peace", it is one of the highlights of the album, has a bittersweet guitar storyline and stubborn, very classical and quite effective harmonic idea.

And again, there is the dramatic story of the man who hangs himself in the garden of his villa, a kind of alter ego of fragile Followill overwhelmed by too many drugs and a history that is falling apart ( "Over"). It is a tribute to Blaze Foley, country singer murdered in 1989, just 39 years old, genius and beautiful loser, in the definition of Lucinda Williams ( "Reverend"). But the most bizarre story is probably that of "Find me" where a girl - inspired once again to the wife of Caleb, model Lily Aldridge - falls in love with a ghost that haunts in a hotel room in Los Angeles. It is air paradigmatic you pull on this record: the Hotel California of Kings Of Leon is disturbing as much as that of the Eagles. "WALLS" is also an acronym that stands for "We are like love songs", a seemingly harmless and positive statement, but this album is made of broken dreams, ghosts and death.