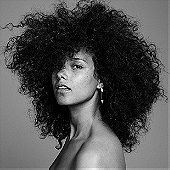 No one has ever questioned the technical qualities, singing and composition of Alicia Keys since his 2001 debut "Songs in A Minor", but the impression was always that the New York singer in every disc wanted to prove something more here is therefore the use of fashion atmospheres and Londoners beat Jamie XX in his previous "Girl on fire", the direct comparison with Beyoncé (with which she sang in "Put it in a love song" from "the Element of Freedom") or that will always be the protagonist of the sound at the time, but not really get into it at all.

This time before the release of "Here" (her sixth album which is out today on all formats) has prepared the ground with a marketing strategy and "Life Design" very effective, starting from a photo shoot of Paola Kudaci (from which comes also the cover of the disc) where the Keys pose without makeup. The service has done so uproar not only the Keys decided to keep this look also for the tv show "The Voice US" where is the judge, but with the hashtag #nomakeup realizes a real awareness campaign to help develop self-acceptance and appreciation of the natural beauty in women worldwide, and they are being attended by Beyonce, Adele and other women showbiz posting on Instagram selfies au naturel.

Simplicity, return to the roots, awareness, empowerment of women are themes - very popular today among the black singer, indeed - which are also found in 12 songs (plus the usual 4 spoken interlude, these constant) collected inside the standard version of "Here".

Since martial "The Gospel" which opens the record it soon becomes clear what will be the hard line: few instruments - piano, hammond, classical guitar, bass and drums - and then choirs and a style of vocals and rap that can not not recall the cornerstone of contemporary black music that was "the Miseducation of Lauryn Hill" ( "Kill your Mama"). The disc is made with a few musicians, almost family - with her husband Swizz Beatz producing - without special hosted or featuring high-sounding. There are some 'all matrices of traditional black music, from spirituals revisited "Pawn it all" up to the blues of "Illusion of Bliss", the caribbean pop of "Girl Can not Be Her Self" (where you deal with the again the theme of no make up) to the classic piece à la Alicia Keys "More than we now".

Unlike recent discs r'n'b (from Knowles sisters Frank Ocean up to D'angelo) where the game is to strip the flesh and dissect the individual pieces with electronic entries and glitch, here we find ourselves in front of songs- songs, from classical structure with a basic arrangement but with instrumental goodies (vibraphone in "She Do not Really Care / 1 Luv").

Between tracks worth mentioning is the beautiful single "blended family" (with the single disc featuring signed A $ AP Rocky) based on the sample of "What I am" Edie Brickell, and that tells the healing power of extended families and co-parenting and the new single "holy war", a song condemning the idea that "war is holy and sex is obscene" and could become a new classic.

Playing on simplicity and depth, without much to go after fads, Alicia Keys has released his best album, a collection of potential singles that will accompany us for the coming winter.