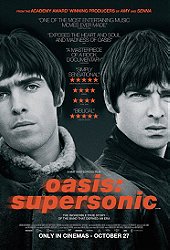 Words into music. Arrows crossing the soul and leave indelible marks. Memories, emotions, sensations. Tears that occur at the corners of the eyes when echoing the first notes of those songs that remain indelibly in the hearts and minds. Simply eternity is what we require members ramshackle one of the biggest rock bands of all time in Oasis: Supersonic, showing the will to persist into the well with their music and remain firmly attached to the center of the story.
They came out of nowhere and they wanted everything from the rise of the ashes of their career, Oasis: Supersonic contains the three-year journey of Oasis to arrive at the peak of a desire always craved, and the travails of the British group rhythms that marked the decade of the nineties.

Never take the people involved, but letting ourselves be guided by the voices of those who have contributed to the creation of one of the most entrancing musical phenomena of the entire world of entertainment, the documentary directed by Mat Whitecross (The Road to Guatamano, Scott Walker: 30 Century Man Spike Island) makes use of a vast archive of images and archive video as a collage combine and overlap to create the picture of the birth and success of the band formed by Liam and Noel Gallagher, Bonehead, Guigsy and Tony McCarroll, the spontaneous conviction of young boys to be able to get on top of everything.
Forthright, honest, Oasis: Supersonic Oasis show themselves for what they are
oasis supersonic
The band Oasis to complete

The Oasis of the indie rock group shows as well as it has done during his revolutionary existence in a documentary about the origins of a nucleus that touched the peaks of the worldwide phenomenon: forthright, honest, direct as directed is the sound of their sound, without rhetoric or refined structure. The components relive the years that led up to the triumphant concert of 1996 at Knebworth Park, where it was consumed the true spirit of the glorious union.

Reliving the experiences of those who, for better or for worse, has helped fuel the explosive fire of the British Oasis, are the testimonies of Liam and Noel Gallagher unequivocally the most substantial; two brothers, two crazy that the strenuous of Cain and Abel, were able to turn the resentment and jealousy of two genes in continuous and silent competition in a compound of memorable music, managing to meet their continuing problems thanks to a recognized and timeless, and curious affection.


Without a shadow of modesty and recognizing even after many years the powerful value that brought the music scene, is the pure passion that guided Liam, Noel and the rest of the group towards a road for them always was marked, the solid certainty since from the beginnings of one day becoming the best rock band on the planet and recognize that from an early, unknown performances.

Through the registration of first two extraordinary albums Definitely Maybe (1994) - from which came the debut song that gives title to the documentary - and plurivenduto and rewarded (What's the Story?) Morning Glory (1995), Oasis: Supersonic you does flag arrogance of two characters together in conflict and yet united by the idea of ​​making it, convinced that the important thing was not what would be in their careers, but only the impact and the effect that would have produced the their audience on the large songs.

A path made of alcohol, drugs, violent disruptions and cockiness that Liam, Noel & Com. Do not regret, moved in the past by a restlessness that forged the character and albums of the most influential Brit rock group in history and filled with meaning those stadiums filled with people, who sang the senseless words of a text written at three in the morning a lightning.

Listening again to the pieces that have realized the identity of the Oasis, poetics Wonderwall, all'incontenibile Do not Look Back In Anger until inspiration Champagne Supernova, Oasis: Supersonic tells antagonism that was driving and destruction of irreverent band , another document attesting to posterity that the Gallagher items were able to pass the test of time with greatness.