Resurrection of the Batman franchise 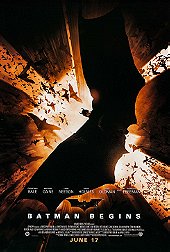 "It's not who I am underneath, but what I do that defines me."


Tim Burton revitalised the Batman movie franchise in 1989 when the world witnessed the release of Batman. Burton's original film is still possibly the greatest superhero movie of all time. This was the first live action interpretation of Batman since the unbelievably campy TV series and movie of the 1960s that had just about done it in. Director Burton had gone to the graphic novels of the Dark Knight, infusing his two Batman movies with a moody, noirish tone that left fans satisfied and transformed non-fans into believers. Little did Burton know that director Joel Schumacher would hijack the series after Burton created Batman and Batman Returns. After director Schumacher created the mediocre Batman Forever (a fairly dismal title), he then buried the franchise six feet under with the indescribably bad Batman & Robin. The 1997 release of this terrible aforementioned film effectively derailed the Batman express for the succeeding 8 years.

In 2005, renowned director Christopher Nolan returned to square one to start all over again to repair the damage. Nolan was already famous for such films as Memento and Insomnia. In hindsight, this director was the perfect choice to instigate the birth of Batman Begins...the best escapade of the Caped Crusader since Tim Burton's brilliant 1989 blockbuster. First of all, it's extremely important to note that Batman Begins is in no way related to the preceding Batman films. Instead, director Nolan opted to start the series at the beginning. This is a different timeline...essentially an entirely different universe for Batman. To ensure no disasters like Batman & Robin ever occur again, all the previous Batman films are completely disregarded.

Although a bold move, the efforts of the creative team are virtually impeccable. With modern technology in place, the visuals look fantastic. I must state, though, that this interpretation of Gotham City is far more regular than Burton's mind-blowing vision. It essentially resembles any city in America. Nonetheless, every other location is delightful to behold. From the Batcave to Bruce Wayne's estate...to glorious locations displayed at a training facility in the middle of a snowy climate. Batman Begins is a phenomenal film, and while it doesn't invoke the effective mystique of Burton's initial movies, it has abandoned the look of an old comic book for the darker, more realistic aspect of a graphic novel. Gone is the campy dialogue, the detestable corniness and the embarrassing screenplays exhibited previously (in all the non-Burton films). In its place is a gritty, realistic, highly entertaining film guaranteed to please fans of all ages.

As the title suggests, the film dives into the origins of Bruce Wayne and the Batman legend. The whole story is absorbing and complimented with amazingly effective (and compelling) drama mixed with exhilarating action aplenty. The first half of Batman Begins recounts the genesis of Batman: how infuriated, disheartened young billionaire Bruce Wayne (Bale) travels the ends of the Earth to examine the criminal mind and struggle with his own fears, forever seeking a means to combat the injustice he sees around him. Wayne seeks training in an ancient society known as the League of Shadows: centuries old and with an impressive reputation, they are committed to checking world balance. Here he learns to look inward, confront himself, and employ his inner as well as outer strength. When Wayne returns to Gotham City he finds his home governed by corruption, fear and crime. In the film's second half, we watch the transformation of drab billionaire to a caped superhero dedicated to erasing crime. The film takes great pains to offer every facet of its plot and characters as things that could truly happen, no matter how outrageous. There isn't any radioactive bat biting Bruce Wayne to transform him into an instantaneous superhero with mystical powers. Wayne is a commonplace human with extraordinary susceptibilities, a robust physical make-up, access to high-tech gadgetry, and masses of money.

Director Christopher Nolan clearly distances his film from those preceding it. Personally, I found the film to be energetic, exciting, exuberant, involving, compelling and enthralling. There's plenty of drama to exhibit with equal amounts of action. However, Nolan's style isn't without flaws. For starters, it seems Nolan believes everyone expects the irritating close-ups and quick-cutting. Not just for the action, but for the entire film. In action it's detracting albeit still exciting. Nevertheless, I must give credit to the entire creative team for pulling off an incredibly atmospheric adventure. Burton's 1989 film had equal amounts of drama, comedy and action. Nicholson's embodiment of the Joker made us laugh constantly. He was comic relief mixed with psychopathic undertones. Instead of conforming to the set standard, Nolan opts for straight-up drama. This could have proved disastrous as the comics are mainly aimed at younger viewers who may find so much seriousness off-putting. However this style works! The visuals are impressive enough for kids to be excited about. Even during the drama, kids won't be bored (except for perhaps some instances when Batman isn't anywhere to be seen).

The cast is filled with some of the biggest names from the last few decades. Leading the cast is Welsh-born actor Christian Bale. While Michael Keaton shall always remain my all-time preference as Batman, Bale comes in at a close second. It's an extremely close call. Bale easily beats Val Kilmer, although granted Kilmer's interpretation was still highly impressive. Even easier, Bale is far superior to George Clooney (Even Adam West was better than George! It's amusing to note that George apologised for being part of wrecking the Batman franchise, and he even offered to refund the ticket price to anyone who saw the film). Christian Bale is charming as billionaire Bruce Wayne, and perfectly makes Batman his own. His strong jaw-line looks particularly good while under the mask. I will admit that his voice was sometimes slightly over-the-top. Occasionally it just sounds like he has a sore throat. Also in the cast are Liam Neeson, Morgan Freeman, Michael Caine (in my opinion surpassing Michael Gough as Alfred the butler), Gary Oldman, Tom Wilkinson and even Rutger Hauer. Everyone is perfectly cast with the exception of Katie Holmes who seems extremely lightweight in an otherwise solid bunch of actors. Holmes should never be given the opportunity to reprise this role. Sorry, Tom Cruise, but your wife is an underwhelming actress. (Funny thing is...Katie won a Razzie Award for 'Most Tiresome Tabloid Target' shared with Tom. Katie was also nominated for a Razzie Award for 'Worst Supporting Actress'. Who's to quibble? She sucks!)

Overall, Batman Begins clearly surpasses Batman Returns, Batman Forever and Batman & Robin with flying colours. It's still not as brilliant as Burton's 1989 Batman, but the film is certainly on par. Considering the diminishing quality of the previous two Batman outings, it's easy to discern why it's a fantastic choice to reboot the series. The creative team underwent a labour of love, painfully researching the source material for maximum quality. This film is only marginally flawed by slight over-length, the sometimes detracting shaky cam and by Katie Holmes' disappointing performance. Despite a number of shortcomings, the style is essentially perfect and the atmosphere is effective. If you consider yourself a fan of the comics or the character, watch this film without hesitation. Followed by The Dark Knight.