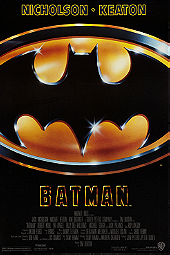 "Tell me something, my friend. You ever dance with the devil in the pale moonlight?"


When director Tim Burton grasped the reigns of the first serious screen manifestation of the DC Comics superhero, The Dark Knight (a.k.a. Batman), fans were understandably slightly nervous considering the director's little prior experience as a filmmaker. If one inspects director Burton's current résumé, it's crammed with some of the greatest fantasy films of all time - from Big Fish to Edward Scissorhands. However, towards the end of the 1980s he was only commercially recognised for Pee-wee's Big Adventure and Beetlejuice. Tim Burton's Batman marks the first escapade of the illustrious superhero since the incredibly campy 1960s TV show. It was apparent from the outset that Burton's intent was to visibly separate himself from those roots, instead opting to return to the menacing psychopathology of vigilante violence amidst a neo-noir atmosphere with chilling gothic connotations. Burton's amazing vision is a mix of noir mobster clichés with remote psychotic notions that appear to encompass their origins in dreamlike imagery cast over with the compelling spectacle of the legendary Dark Knight. In a nutshell: this makes for equally a visual and an expressive extravagance.

Batman introduces an innovative interpretation of the renowned character: a traumatised albeit determined vigilante...a spot on blend of hero and anti-hero. The creative team eliminate the embarrassingly atrocious blue tights worn by Adam West in the 1960s TV show (and the campy film): these are substituted with smooth leather, latex and marvellously meticulous body armour. To contrast the dark image of Batman, we are presented with a flamboyant, vivacious Jack Nicholson portraying Batman's arch nemesis...the Joker. The characters are wholly believable as opposed to over-the-top and campy. They are placed where they belong: in a serious film noir. Burton's Batman is a template for the superhero genre that also introduced an innovative formula. This masterpiece gave birth to both the summer blockbuster and the contemporary superhero genre in general.

Bruce Wayne (Keaton) is a millionaire whose parents were killed when he was a boy. Bruce is now residing in Gotham City which is governed by fear and crime. By day he's a bland rich man with seemingly nothing to do. But by night, he masquerades as the Caped Crusader who's an illustrious, albeit mysterious figure. Jack Napier (Nicholson) is a criminal being hunted by the authorities. Following a disastrous encounter with Batman, Jack Napier returns as the Joker who threatens the entire population of Gotham City. The Joker is a brilliant but unreservedly crazy criminal mastermind capable of heinous and unpredictable brutality.

There are countless reasons in relation to why Tim Burton's Batman is a masterpiece of the highest regard. Principally, its brilliance is due to the director's decision to make his production as dark and realistic as possible while still preserving a comic-book sensibility. There's impressive stylised violence that's spectacular but not brutal. The kids will love the film due to its visuals, while the adults will appreciate the film on a much broader scale. It's a daunting task to convincingly pull off a film concerning a crime-fighter in a bat suit swinging from one building to the next in a fictional Gotham City. Burton manages the achievement by making us believe the characters, their ambitions, and even believe in their predicaments. Burton helps us suspend our disbelief by crafting a noir-ish atmosphere reminiscent of the best Hollywood film noirs of the 40s, the 50s and the greatest graphic novels of the 80s and beyond: we are presented with shadowy rooms; gloomy, rain-swept streets; and dark, smoke-filled alleys. This is a towering spectacle that stands as a monumentally creative reinvention of a superhero for the big screen.

The vision of Gotham City is an unparalleled feat. Instead of a typical city setting similar to those frequently seen in America, we are transported to a visual feast that is marvellous to behold. It's like a page of the comic being transported to film. The combination of Anton Furst's production design and Peter Young's set decoration makes everything look truly impeccable. On top of this, the action is satisfying and abundant. People watch superhero films to see their favourite superhero overpowering their adversaries. From start to finish we have a clear-cut villain, and we're rooting for the good guy. Then there's Danny Elfman's invigorating musical score containing a theme as recognisable and as energetic as the Superman theme. Prince also contributed a few songs to the film's soundtrack. Sure, they may sound silly but it adds to the film's perfect tone. One glance at the opening sequence alone and you know it's Batman: a unique labour of love flaunting considerable inspiration and imagination.

Michael Keaton shall always be Batman through my eyes. Burton's decision would have been considered slightly peculiar as the actor was known mainly for comedic roles (like featuring in Burton's Beetlejuice), however Keaton proves capable of pulling off a complicated role. Jack Nicholson is brilliant as the Joker. Granted he's over-the-top, but he nails the character's sinister undertones while maintaining a colourful appearance. His laugh and smile are faultless here. Kim Basinger would probably be considered an odd choice as well. But lo and behold: she also nails her character of the nervous and determined journalist. Also in the magnificent supporting cast you'll find such names as Robert Wuhl, Pat Hingle and Billy Dee Williams. Michael Gough is perfect as Alfred. He has a warm feel to his character and it's impossible to imagine someone pulling off a better performance.

All in all, Tim Burton has accomplished a groundbreaking masterpiece with his neo-gothic vision of Batman. The comic has been brought to life in an amazing cinematic event. I remember watching this classic film as a child and adoring it. Years have passed, but I'm still in complete awe at everything about this film. It's perhaps needlessly long and slightly slow-paced around the middle section...still, this is possibly the greatest superhero affair of all time: a groundbreaking visual and aural onslaught that altered the way in which comic book adaptations were viewed. Followed by Batman Returns, and an additional two sequels before the series was rebooted in 2005.