I Wouldn't Want These Bosses or Movie 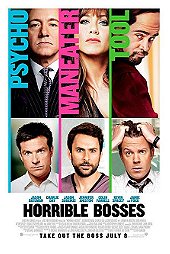 I saw the trailer for Horrible Bosses at the showing for Green Lantern and saw that Jason Bateman was in it and it seemed to be fairly funny and was wanting to see it but after watching it I don't know why I thought that.

Jason Bateman, Charlie Day, Jason Sudeikis play three friends that good jobs with absolutely horrible people for bosses. One day they all decide that maybe they should kill their bosses to make their lives better and go for a Strangers on a Train plan to have all of them kill each others bosses so they can't link the murders to each other.
"Hilarity" ensues as they all try to carry out their plans but of course fail.
Casting is okay with Jason Bateman, Kevin Spacey, Jennifer Aniston, Jamie Foxx, Donald Sutherland, and Colin Farrell but none of their abilities come out and really is a waste of talent.
As for being a comedy this really fails as most are sex and poop jokes and even they aren't funny like similar comedy that have come out recently.

In the end Horrible Bosses is a craptacular comedy that is waste of time.