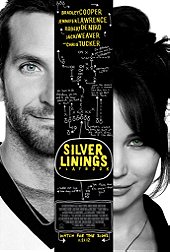 Although not perfect, Silver Linings Playbook has to be one of the best films of the 2010s. An eye-opening interpretation of mental illness and its stigma within todays society, SLP presented audiences with a story that held attention past the credits. With a realistic basis of a storyline, David O. Russell wove together a beautiful web of comedy and drama with a dazzling cast and heartfelt narrative. Russell's adaption of Matthew Quick's novel brought justice to this jaw-dropping story.
The characters of the film (including the chemistry and dialogue between actors) are truly what drive this cinematic work of art to success. Nearly all of the cast members gave knockout performances that left audiences stunned at their talent of projecting seemingly raw feelings and emotions. Bradley Cooper truly shone as a dramatic actor, shaking off his blockbuster typecast status from the Hangover series and truly performing! Cooper's take on the role of a man struggling with bipolar disorder, in the midst of a nasty divorce and rehabilitation release, beautifully demonstrates his skill as a leading man. His phenomenal ability to display a vast emotional range allowed him to convince audiences of his internal frustrations and begged them to sympathize for him.

Although Cooper easily fulfilled the lead role with his incredible screen presence, Lawrence truly stole the show. With her witty one-liners and unbelievable display of anger and vulnerability, JLaw drew attention to the uncontrollableness of mental disease and highlighted the difficulty one has dealing with it. Her deranged screaming fits, bizarre vulgarity, and innocent desire of appreciation captured attention perfectly. Many good actors are praised for their ability to "act naked," or rather, expose their deepest feelings through their craft of acting. Lawrence clearly displays that ability and rightfully deserved an Oscar for her exceptional portrayal.

De Niro, the heavyweight of the film, brought his A-game and proved why so many consider him to be a Hollywood legend. His projection of a lack of understanding towards his character's son's disorder was believable and brought the story down to earth. His pairing with Jacki Weaver is a match made in heaven, as they both function impeccably as a convincing couple, especially during the scene of Pat's desperate search for his wedding video. Weaver nails the role of an unconditionally loving mother.

Tucker, Kher, Ortiz, and Stiles all shine in their respective moments. Although they had different tones set in the film, they cemented reality into the crazy lives of Tiffany and the Solitano family. Shea Whigham was the only disappointing appearance in the film, but his role was relatively minor, so that isn't a huge loss.

Throughout the film, dialogue is mastered by the cast to the point where the audience relates to the everyday setting of a presumably typical group of people. However, Russell skillfully utilizes extreme emotional responses and noticeable body language to draw attention to the mental illness the two main characters face. He beautifully nails home the message that silver linings are unattainable, but necessary for any real change to be made. His usage of mental illness as a vessel allows for the audience to fully understand and feel the idea of hard work and dedication paying off.

What truly gets the audience captivated is the bet that Pat and Pat Sr. share involving the football game and the dance recital. We feel their excitement, disappointment, happiness, and grief, as it seemingly exudes from the screen. The only pitfall of the film is that Cooper's condition is verbally confirmed to have changed overtime, but the only evidence of that is his lack of explosive episodes in the conclusion of the film. Had more minor detailing been in place, this movie would be practically perfect.

Overall, this film is well deserving of its universal praise, particularly towards the acting talent and Russell's masterful piecing together of the story. This film will go down as one of this generation's greatest films and is certainly worth the watch. No wonder I've seen it thrice over.