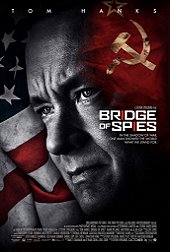 Following the impressive ‘Lincoln’ and since this movie was really well received, I was really eager to check this new directing effort from Steve Spielberg. Well, to be honest, I thought it was actually slightly disappointing. I mean, sure, Spielberg knows how to direct a movie so it was technically well made and visually appealing but I actually had a hard time to really care about this story. I mean, that’s always a tricky thing when you are dealing with a thriller for which you know the outcome from the very beginning, you still have to find a way to keep the audience captivated by the proceedings and this movie never managed to really entertain me. First of all, the first half, when Donovan was first fighting for Abel’s rights felt rather pointless and hypocritical. Indeed, I thought it was pointless because the movie was never about if Abel should have more rights or not, it was about exchanging him with an American spy. It felt also hypocritical because it is really easy to point fingers about how the American people used to be intolerant 50 years ago. Then, the 2nd half about the actual exchange was better but still not really amazing. In this case, the issue was, as pointed out before, that the outcome was already obvious from the start and even though they tried to convince the viewers that everything might go south at some point, I never felt any real danger at any point. To conclude, even though it didn’t convince me, it was still a decent watch though but I think it is actually a minor effort from Spielberg.