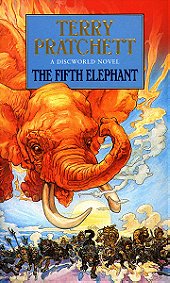 The Fifth Elephant is the 24th Discworld novel.

In Ankh-Morpork, the Scone of Stone, the Dwarfs' sacred relic, has been stolen, and the director of the rubber factory has just been murdered.

As Sam Vimes is sent on a diplomatic mission to Uberwald for the coronation of the new King of the Dwarfs, and Captain Carrot has gone in search of missing Angua, Lord Vetinari reluctanctly promotes Fred Colon as Captain of the Watch...

Although presented as a novel of the Ankh-Morpork City Watch, the action is principally centered on Sam Vimes and his struggle with the not-so-nice werewolves of Uberwald.

With its numerous winks to our own world, as well as the guest appearence of dear characters such as DEATH or Gaspode the Wonder Dog, the Fifth Elephant turns out as funny as I expected a Pratchett novel to be. Definitely a very good read!