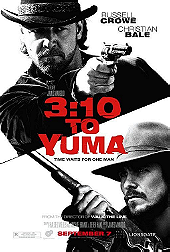 "...And you just remember that your old man walked Ben Wade to that station when nobody else would."

3:10 to Yuma is an extremely gratifying and poignant film that has exceeded all expectations and values that I would have ever wanted. At first glance 3:10 to Yuma doesn't look quite as rewarding as it turned out to be, but I am more than happy that I have seen it.

The story itself is clever and affecting beyond any other western movie that I have seen before. I'm not much of a fan of western movies, but with this amazing line up of actors a promising look, I decided that I would have to find out what this film is really like. Although the story seems simple, even so it can easily be called unique and memorable nonetheless. It tells an exceptional story of apprehension and desperation, and eventually leads to pride and an emotional and inner battle for recognition and self-importance.
The ending was impressive and certainly unforgettable. It makes the overall film very moving and incredible to watch. As it reaches the climax within the last few scenes, I began to realise how incredible the film was relating to the deep connections and how gripping the story became. 3:10 to Yuma ends on a high note and keeps the viewer still compelled until the very last moment when in reaches an astounding and somehow mystifying end.

3:10 to Yuma soon became an intense and riveting film, delivering strong emotion and some enthralling battles and western style action. James Mangold's directing was incredible and astonishing beyond anything I would have imagined. He perfectly brought the story onto the big screen. The cinematography is also to be commended, there were many beautiful shots throughout the film, giving 3:10 to Yuma a stunning and dramatic setting, perfect for this particular story to take place.
The score was tremendous and exhilarating, easily becoming an essential part to creating the complete atmosphere of this film. Even as the end credits begin to start, the score seems most memorable and recognisable as a key part to the film, especially at it's most appropriate end.

The acting overall was engaging and powerful, which was essential for the unique characters which were all incredibly appropriate for the actors. Russell Crowe as the famed outlaw Ben Wade was a choice beyond perfect. He completely aced his role and gave a strong and thrilling performance. Christian Bale was also brilliant for his role. He was potent and remarkable, and again was the perfect casting choice. Logan Lerman shined and showed what incredible talent he has, also giving an exceptional performance. Dallas Roberts was impressive and created even a memorable character for his slightly smaller role. I must say that Ben Foster gave an incredibly intense and electrifying performance. He quickly exceeded every expectation I had for him and gave an extremely powerful and truly unforgettable performance. Peter Fonda was also striking and notable, another familiar face. Alan Tudyk has always been an actor that I have admired, and seeing him in 3:10 to Yuma has again proved that he has a lot of talent that he continues to show.

I've never seen the original 3:10 to Yuma, but seeing this version has made me realise that western films can certainly be impressive and entertaining. This is a pleasurable and provoking film that should be seen by all, and I strongly recommend this to anyone that hasn't seen it... western movie lover or not, this is a must see film. Some aspects are indescribable because of their amazing originality, and how it is so incredible surreal.. but when it comes down to it 3:10 to Yuma is astonishing and brilliant beyond words.