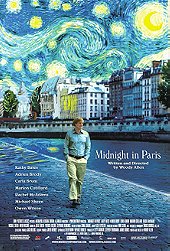 Woody Allen's latest film is the cinematic equivalent of going to dinner at an ultra-fancy and elegant restaurant at which finger foods are the only items on the menu; there may be a certain charm to the classiness of the whole experience and it may be visually appealing, but there's no doubt that it won't offer the substantial satisfaction and nourishment that you're craving. MIDNIGHT IN PARIS has a cute little premise and it's at times nice to look at, but golly, it's one wildly superficial movie. Not once does it go beneath the surface in its examination of love and nostalgia, and what's worse is that this is coming from a director who HAS succeeded at offering profound explorations of those subjects, which inevitably makes one wonder whether the superficiality here is on purpose, or if Allen has simply turned lazy.

Gil (Owen Wilson) and Inez (Rachel McAdams) are two Americans who are engaged to be married. Gil leads a financially comfortable life, thanks to the fact that he's been working as a screenwriter for Hollywood films over the last few years. But he feels that his true passion may be for novel-writing, and he finds that, in the U.S., he can't quite get the inspiration he needs to write his book. So, when Inez's parents decide to go on vacation to Paris, Gil decides that he and Inez should join them on the trip, thinking that perhaps the enchanting European city will help his prose start flowing. Once they're in Paris, Gil indeed seems to get a spurt of inspiration, but much to his chagrin, he and Inez soon run into another couple: Paul (Michael Sheen) and Carol (Nina Arianda). Gil is clearly hesitant to spend any time with this other couple, and we soon find out why: Paul is one of those pretentious know-it-alls, and the fact that Inez seems to be so impressed by Paul would render anyone jealous. One evening, the two couples plan to go out dancing, but Gil is, of course, not excited at all about the idea, so he stays behind. As he's walking the streets of Paris alone, an old car passes by and its passengers encourage him to get in. He accepts, and as it turns out, the car is actually a portal that takes Gil back in time to Paris in the 1920s.

If you asked me to reduce the experience of MIDNIGHT IN PARIS to a few words, I would say that it's an exercise in name-dropping. You see, as soon as Gil enters the 1920s, he runs into the likes of F. Scott Fitzgerald, Ernest Hemingway, Salvador Dali and T.S. Eliot. Sounds wonderful, doesn't it? It's too bad that the execution isn't wonderful. MIDNIGHT IN PARIS consists of Gil having incredibly lackluster conversations about life and love with these artists from the past. One must imagine that Allen admires at least some of the artists that he has made characters in his film, but in all seriousness, if he thinks that these people were as bland conversationalists as he depicts them here, then I wonder what he really thinks of their work. The most severe problem here comes with Corey Stoll's performance as Hemingway - his baritone line delivery is at times dreadful, almost as though he were reading from a teleprompter, and the actor's portrait of Hemingway as this brooding guy with an eternal blank stare feels awfully exaggerated. I was watching the film with a large audience, and I did hear occasional reactions from them, but I soon realized that the reactions were along the lines of "Oooh, look! It's Gertrude Stein!", and that there wasn't any sort of response to the film's wit or its character dynamics, because both of those things are hit-and-miss at best.

Throughout the film, the protagonist goes back and forth from the present to the 1920s, and I wish I could say that the scenes in the present that depict Gil and Inez's devolving relationship at least make the film better, but I can't. Quite the contrary, actually. The whole dynamic with Gil's jealousy of Inez's admiration of Paul quickly turns cartoonish. There is a scene at a museum in which Paul is spewing information about the pieces of art they're looking at, and as soon as Gil tries to intervene to offer equally insightful information, Inez immediately interrupts him to say: "Shh! I'm trying to listen to what Paul has to say." Childish script-writing at its finest, and the fact that it's from Woody Allen's pen makes it all the more disconcerting. Oh, and we're helpfully told early on in the film that Inez's parents are right-wing Republicans that we need to immediately hate and dismiss as close-minded - I'm as liberal as can be, but as a cinephile, I can't help getting pissed off when a film picks such an easy target and portrays it so one-dimensionally. All this kept making me constantly want the film to go back to the 1920s scenes, because vapid as they are, at least they aren't as painfully forced as the scenes that try to capture Gil and Inez's failing relationship.

The film does begin with a really nice long montage featuring several locations of the titular city. This is deceptive, though, because it may give the viewer the impression that MIDNIGHT IN PARIS will function as a love letter to the French capital, but the truth is that, once that montage is over, we see less of Paris' vistas than we do of Owen Wilson's face smiling and smirking. Wilson's performance isn't bad by any means, though - this is different material than he's had to handle before, and I'll concede that there are scenes in which he could've gone over-the-top and correctly goes for subtlety instead. Rachel McAdams was apparently asked to simply act as shrill as possible, and if that was the goal, then I suppose she deserves all the credit in the world, though it's of no help, especially in many of the ridiculous hard-to-believe scenes that depict the problems faced by the film's main couple.

If there's something positive to be said about MIDNIGHT IN PARIS is that its ultimate moral is at least interesting. The film believes that, no matter what happens, one will always have a certain level of dissatisfaction with one's "present" and that it's inevitable that there will be a yearning for the past. When we think about the past, we often only think of the good things, so it's easy to delude oneself into thinking that the past was better, even though it probably had just as many shitty moments as the present does. I also give credit to the film for being humble enough to tell us that this is only "a minor insight" and not trying to pretend as though it has made some sort of discovery. If MIDNIGHT IN PARIS had offered this message through an intelligent script and with interesting character dynamics, I'd easily call the film a winner.

Of course, the other good thing to be said about MIDNIGHT IN PARIS is that it's at least better than a lot of the utterly mediocre stuff that Allen has put out in the last couple of years. When compared to something as pretentious as MELINDA & MELINDA, as lame as SCOOP, and as wildly unfunny as last year's lifeless YOU WILL MEET A TALL DARK STRANGER, this film seems much better, but of course, that doesn't mean it's good. Back in 2005, MATCH POINT offered some hope that perhaps the writer/director's brilliance was coming back - that film's script was so nuanced, its performances so on the nose and its dramatic/suspenseful core so well-built, that one couldn't be faulted for suddenly developing high expectations. It's too bad. I'm still waiting to see whether he'll ever offer us something as great as CRIMES AND MISDEMEANORS again, but I'm growing more and more skeptical of it ever happening.

If you're interested in seeing a film that offers a profound exploration of the themes of life and love, whilst photographing a beautiful European city, I heartily recommend BEFORE SUNRISE, which is a true masterpiece of dialogue, emotion and acting. On the other hand, when stripped down to its essentials, MIDNIGHT IN PARIS is nothing but a somewhat good-looking exercise in name-dropping. I'm sorry to say it like this, but I find it dispiriting to hear someone say they think a movie is cool because "OMG! Pablo Picasso was actually a character in the movie!" Anyone can sit down and make a movie that features artists from olden times as characters. The question is whether you can make the whole thing organic and interesting and give it a dramatic flair that will make the film worth seeing for at least two or three reasons other than the presence of those particular characters. That's certainly not what happens in MIDNIGHT IN PARIS. To add insult to injury, but without spoiling anything, the film's final few minutes are incredibly contrived. It's been a while since I've rolled my eyes so manifestly as soon as the credits started rolling.